Crappie With A Fly 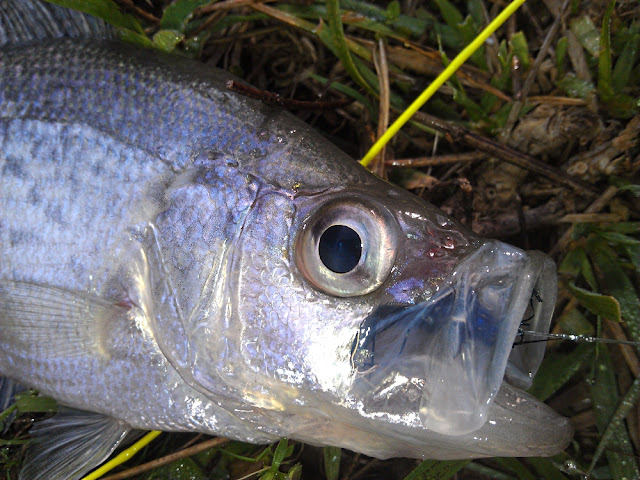 The water must be warming up because the other day a buddy and I got out early to hit a friends pond and I managed to hook into a pair of crappies.  I was really struck by the silver sides on these fish because last year when I hooked into crappies around this time of year, they where a much darker color. 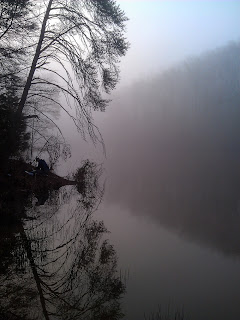 Perhaps my fellow bloggers can help me with this but I have always believed that the colors of these fish are strongly influenced by the temperatures of the water and how deep these fish are.  This conclusion has been supported by the fact that early in the year I usually catch darker crappies since they have been at the bottom of the pond all winter.  As the weather warms and the ponds temperature increases, the fish spend more time at the surface and I end up catching crappie that are a much lighter color.
The other day we rolled up on this remote pond as the sun was cutting through the deep morning fog.  I took this pic of the morning light cresting the pines and if you look closely you can see my buddy on the bank tying up a top water lure.  He eventually ended up with a frustrating goose egg for a fish count.  I on the other hand managed to hook into a good six fish but only landed a pair of crappie - both of which were a striking silver color which leads me to believe that the water has been warmer than normal this winter.  Both fish were caught on a woolly bugger made from Hareline UV Ice Dubbing and a rabbit strip tail. 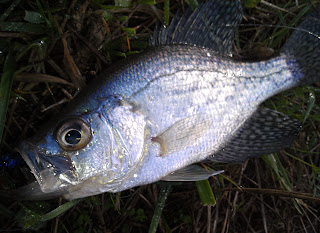 As we headed back to the truck I casually mentioned that once again my fly rod fishing out did his spin rod and he once again dismissed it.  Eventually I hope to convince him to at least give the fly rod a chance but for the time being he is stubbornly holding on to the believe that his spin rod and bass jigs can out fish a fly rod.  I suppose I will just have to continue to out fish him until he relents.... or ends up refusing to fish with me.
Either way, a bad day at the pond is always better than a good day at work.  We headed back home with our heads held high and the hope that the next time we hit the pond we will have more hook-ups than we can handle.
Posted by Unknown at 6:36 AM

Your killing me with the crappies!
Nothing like so good ole' crappie fishing.

I agree the crappies I usually catch in the spring are very dark in color.

That a boy, beat him into submission. Sooner or later he'll see the light.

G Lech - They are killing the Crappies this year! Its going to be a good year.
Shoreman - The beatings will continue!
Kevin - thanks