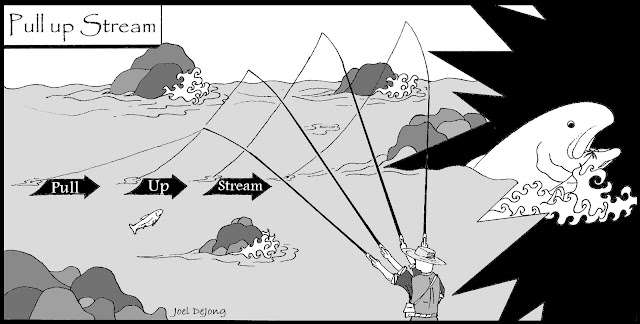 Number three in my series of Tenkara Techniques is the Pull Up Stream.  This is probably going to be the most used of the techniques because is can be accomplished in conjunction with a majority of the techniques I will cover.  I normally do not cast my fly with the intention of using this Pull Up Stream technique but I find myself using it more and more at the tail end of a Pull and Pause or Normal (Dead) Drift cast.  I have also found that once again, this technique is best utilized with a deep drifted wet fly or nymph.  Using this with a dry fly pattern will normally only succeed in drowning your fly and soaking the hackles making your next presentation fall a little flat. So how do you incorporate this into your drift?
1 - While nearing the end of you drift, before the fly has reached the end of the line, begin to gently pull you rod up stream while slightly raising the tip of your Tenkara rod bringing you fly to the surface.
2 - If you wait to long to use this technique you fly will have already begun its rise to the surface due to the tension on the fly line and the Pull Up Stream will be shortened.  To fully utilize this technique it is important to begin this retrieve early enough to control the rise effectively.
3 - Once the fly has reached the surface you can pause a moment and allow the fly to drift slightly down stream once again and give the fish one last shot at it or simply retrieve it for another cast. 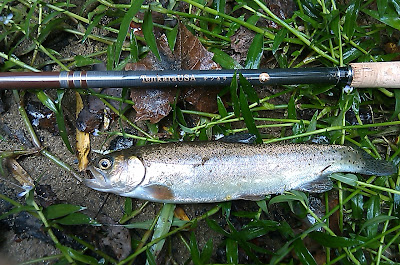 I have received a fair amount of strikes while utilizing this technique at the tail end of a drift and every time it surprises me.  Usually I do not see the fish taking the fly or see where they come from but when they hit it is unmistakable.  The tension on the line is already there and if a fish is going to take a fly on the Pull Up Stream, they are going to hit it fast and hard.  I suppose this is due to their perception that the fly is on the way up and will soon disappear so it is a 'now or never' type of take.  Besides the leap one sees of a fish breaking the surface for a freshly presented dry fly, this kind of take is one of my favorite.
Being a fan of small streamers like the Black Nose Dace, I have also found that this technique works extremely well with heavier weighted patterns.  The extra weight allows for an extended time beneath the surface and longer pull time as well as a natural swimming up stream type of behavior one might see from a small bait fish.
The only other comment I have on this type of technique is that success largely depends on the current speed.  Obviously in faster moving water your fly is going to rise quickly and thus shortening the effective time this technique can be used.  I find that using this method in gentle streams or at the tail end of a gentle bend is the most effective.
Visit TenkarUSA.com or TenkaraBum.com for more info on equipment, flies, and more Tenkara Advice.
Posted by Unknown at 7:28 AM

Wow! fantastic blog I did this techniques during my childhood,thanks for sharing with me

While I don't fish Tenkara I enjoy reading about it.
Joel, your techniques posts have been informative.

Offshore - thanks for visiting
BrkTrt - with the small streams you fish , tenkara would be right up your alley. I am glad you enjoyed the techniques.

Great write up and still learning a bunch about Tenkara!