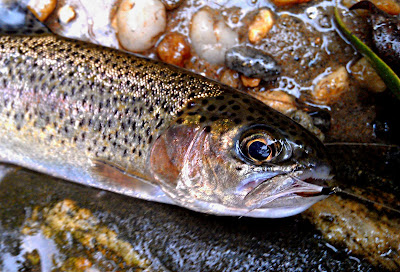 I took a chance the other day and headed up the Chattooga river despite the dingy, high waters.  It was not a banner day but my buddy Kevin and I did manage to hook into a few fish.

After about two hours of searching holes I knew once held nice sized brown and rainbow trout I managed to hook into the first fish of the day.  It was the largest bass I had ever hooked in the river and I began to fear the worst.  I had expected the waters to be warm due to a hot summer but I would have never expected to hook a good sized bass in the holes that once held trout.  I am not sure what is happening to my favorite waters but it seems like I am catching less and less trout in them.  This big bass might be a sign of colder waters becoming more scarce.  Or it might just be a hearty bass enjoying a cool mountain river.

We tried to hike up river in hopes of finding a deep hole a few trout might have held out.  Giving it our best effort we tried to keep our hopes up but after searching hole after hole, ripple after ripple, and every promising looking stretch of water for about a mile up stream, we finally cut our losses and hiked back to the car.  We figured that if we wanted trout, then we would have to drive further north and find the cold water beyond our hiking limit. It was a nice day for fishing with a cool overcast layer and a bit of clouds still hugging the mountain tops.  We only saw the sun a few times and got wet more often with an occasional passing drizzle.  After our drive and a bit of lunch, we unloaded and went looking for trout.  We didn't have to look very hard. 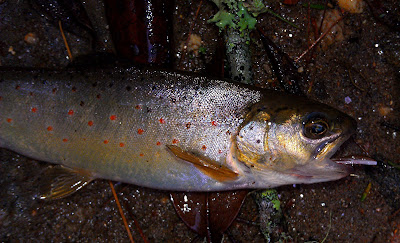 None of them were very big but they were fun to catch.

All together we hooking into about a dozen or so small rainbows, browns, and even a small brookie. 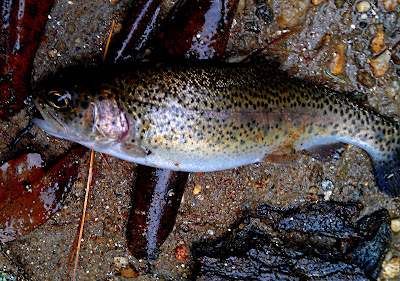 After a few of our tough little trout had been caught a released, we found that we had an audience.  This copperhead, who had been eyeing out progress from the far bank, decided that he had enough of watching us fish and came over to our side for a closer look. 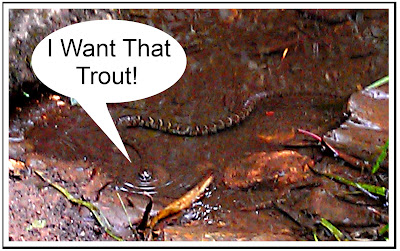 I have seen snakes nearly every time I've been out fishing.  I have even had two snakes take fish right from me.  I've nearly been bitten by a copperhead and a rattler while hiking the river bank and I have learned to try and keep my distance from these unpredictable little guys.  Me and Kevin hung around for a few more casts and then decided that it was enough for the day.  All in all it was a nice day spent with fish and a good friend. 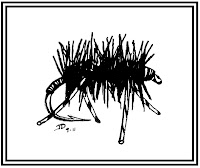 I also thought that I would add a bit of a sketch to today's post since this is a art/fishing blog.  I hope you all have a good weekend.
Posted by Unknown at 5:10 PM

Not that there is anything wrong with bass (nice looking one by the way), it would worry me about the health of your river also.

Oh man Big ole Bass in trout waters, not a great sign. I'll hope for the best for you. Glad you found some trout up north further. I once caught Brook trout alongside Small Mouth which always baffled me. Great Pics and Fish too. Thanks for sharing. Tight Lines.

Brookies and bass.... not good for the brookies.

Nothing wrong with fish while fishing"...
Good day Joel!

Gpa loves to hear your fishing stories. He loved to go fishing:)

Thanks for the comments. It has me concerned when a bass that size is caught where I normally catch trout. I hope it isn't a sign that the river is changing. It was still a fish and I didn't get skunked so it was a good day.

Joel,
Looks like you had great day.
I don't know if it will make you feel any better or not, but I have two thoughts about the biology of your fishing trip.
First, your bass looks like a Redeye Bass (Micropterus coosae). They are native to the Coosa River system, and in my experiences in Alabama they live in some pretty pristine high elevation streams. The DNR for the state of AL refers to them as the "Brook Trout of warmwater game fish." It's not nearly as bad as if Largemouths, Spotteds, or Smallmouths were invading. Based on a quick Google search Redeyes are found in the Chattooga where it becomes marginal trout water so I'm pretty confident about the ID. Redeyes stay pretty small (your fish would be a pretty big one) so they shouldn't be much of a threat.
Second, the snake in the pic is not a Copperhead, but rather a Northern Watersnake (Nerodia sipedon). They are pretty harmless, unless you're a fish or frog. Northern Watersnakes are often mistaken for Copperheads due to the similar coloration and pattern. Copperheads don't really frequent the water. They're more of a forest floor, blend in with the leaf litter, sit and wait predator kind of snake.
Hopefully those two pieces of biology will make you feel a little better.

There's no reason to panic. The brookies and most of the rainbows are stocked fish, put there by GA and NC.I believe brown trout do reproduce in the Chattooga and even rainbows in the upper reaches of the river. The tributaries have naturally reproducing rainbows and browns, and there are a couple that have native brookies in them. You're fish, if I had to guess from the photos alone, are stocker trout. The redeye in your photo shares habitat with trout in many of Georgia's marginal trout water rivers so there's no reason to panic. The river hasn't suddenly risen 30 degrees and become a largemouth fishery. :)

I can tell you the name of a nearby creek that holds native brookies, but you'll need to email me for it. :)

Jay and Owl - Thanks for the inforative comments. I've never seen a bass that far up the river but it is good to know that this type of bass likes the colder clear water. It was a good fighting fish. and Owl, I will be emailing you for that streams name!!
Kevin - thanks for comment