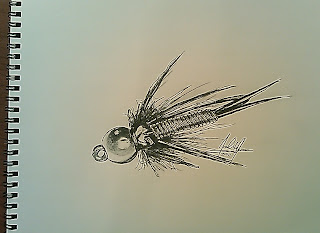 Just a quick sketch of a Copper John I saw while visiting the blog of the RoughFisher.com.  I frequent his site often to check out his carp action.  This sketch is just a simple 4"x6" penciled work while wasting time on the road.
Speaking of on the road I thought I give you a random book review.  I am an avid reader while traveling and have read everything from Hemingway to Cussler, from the Biography of Admiral Nelson to a variety of fishing stories, some true and some not so much.
Recently I picked up an old book while browsing a used bookstore in the Northeast and thought Id share it with you.
The book- Kon Tiki and no its not a fly fishing book but there is fishing in there.

I often like to mix my reading up, for instance my last book was on the American Revolution and the one before it was a bit of Twain, so when I saw this book on the shelf I had to pick it up.  It wasn't a first edition but It was published and printed in 1950.  I had heard of the story before but thought it was about time I read the real account from the man that lived it.

Basically the author of this crazy adventure, Thor Heyerdahl, had this idea that the south sea islands were not populated by the Asians but by the people of Peru.  The only problem was that no one would buy into his theory mainly due to the vast distance (some 4000 miles of desolate ocean) that separated the two locals.  They just couldn't believe that a primitive people in rafts could make such a journey and live.  So to prove his theory was possible, he and 5 of his friends built a Balsa wood raft - that's right, the soft wood you see in a hobby store that splits in two when you look at it funny - and set out on the three month journey across the pacific.  Crazy.  Keep in mind that he did this in 1947 without the aid of GPS.
Throughout the journey the crew lived off Dolphin - the fish not the mammal - shark and flying fish.  he says that the dolphins where constantly surrounding his boat and were eager to bite nearly anything they tossed into the water.  As an avid fly fisherman I salivated at the thought of catching these fish daily (they are great eating).  Thor used standard tackle but I would have defiantly brought my fly rod on such a trip!!! 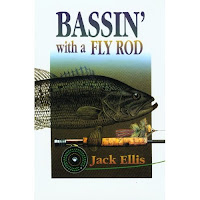 Anyway - thought that those of you that have not already read this book might like a change in pace.  I enjoyed it and thought Id pass it on.  For all you readers that are only inspired to read about fly fishing, my next book is "Bassin' With A Fly Rod" by Jack Ellis.
I thought that I'd brush up on my bass knowledge before the season warms enough for the bass to move in more than Kev's work pond.
Posted by Unknown at 1:05 AM

I think Kev may have a water heater in there... I mean,, Id have to drill a hole if I wanted to snag a bass right now...

Kon-Tiki Expedition is a wonderful book I read years ago. An amazing voyage. And, I love the Copper John. I'm always amazed by people who do some things so well and I can't draw a straight line with a ruler.

the sketch looks better than the actual fly!

Boy, Kon-Tiki takes me back a ways. I think I read that book in the 60's. It's a great read. I'd recommend it to anyone who wants to read a good adventure story.

I don't know what to say about the work ponds. Maybe they are spring fed or get warmer water from some other source. I have no idea. They are ice covered on the coldest weeks of winter. If I had to estimate how deep they are I think maybe 15-20ft. My buddy said the other day it was in the 60's and warm. Supposedly there were 30-40 fish in a sunny area just schooled and sitting there. I imagine warming themselves. He said it was a mixture of bass, and gills. They were almost in rows according to size. I wish he got a picture.

Bgrfsh - Luckly down in the south we rarely have to deal with ice on our ponds but we also dont have the fish out our back door like you got out there.
Cofisher, roughfisher, and shoreman - thanks for the comments, Kon Tiki is truely a classic adventure tale and roughfisher, your tie is a thing of beauty.
Kev - you got me itching to seek out bass on those small ponds around town.