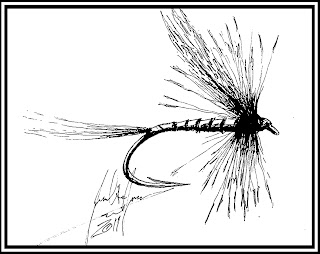 Last Saturday was my regions big FLY FISHING SHOW up in NC and I was hoping to convince the wife to let me drag them along on the trip but something unexpected came up.  In short it was a squirrel in the chimney - AGAIN.  So this past saturday was spent ripping up my siding around my chimney to retrieve a squirrel that had lodged himself between the flu and the fire box.

What I found once I had ripped open a hole was not one expired squirrel but three - well sort - of and the remains of a bird.  The two others and the bird had been there a while and were mainly reduced to charred bones but the squirrel I was after was just visible.  It had expired the day before judging from the noises my wife had heard on Friday so there was no smell or flies yet.
It was a huge hassle to get the bugger out as you can see from the pic below.  He was wedged good and tight and it took a good effort to pull him out.  I was glad I pulled him out when I did.  Any longer and the smell would have been unbearable and any sooner and I would have had a real mess trying to pull a live squirrel out of that space. 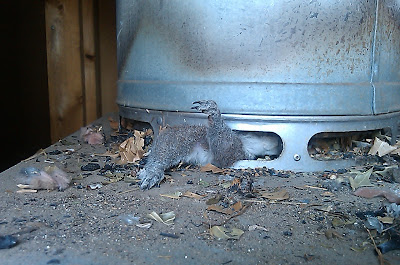 In the end It was about a seven hour job to rip open the wall - retrieve the squirrel - clean the fire box - repair the wall - and place a new squirrel proof cage around the top of the chimney.  It was a whole lot of work and effort to get new material for my fly tying.  As you can see below - I'm not one to waste a good squirrel tail so I whacked it off the critter, washed it good in an alcohol salt solution, coated the cut end in a salty paste, and set it up on a board to dry.  Soon I will have some good squirrel tail streamers to fish with.  My wife thinks I'm nuts but I'm sure some of you can relate. 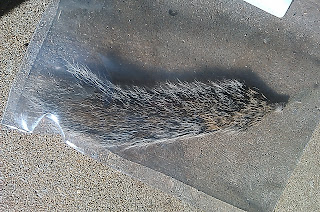 Well since my fly fishing show was interrupted and I had recently gotten my jeep back from the shop, I took Monday to do a little fishing.  As you can see, the trip didn't yield much in the way of fish but this native beauty was taken on a fly of my own creation and just as the squirrel, it was worth the effort.  What was the fly you ask?  Well lost it on the very next cast to an underwater log and since it was a solo fly tied up as a fling (unforgivable mistake) it was the only one that caught a fish, so short of the bad cell phone pics below, all you get is the VERY simple ingredients.
-#12 nymph hook (might be a bit to big)
-Hot Orange Floss for the body
-Black Soft Hackle
(Next time I plan on adding a little wire ribbing to keep the whole thing secure.) 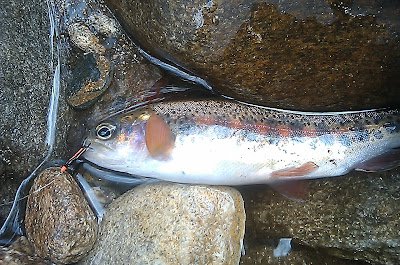 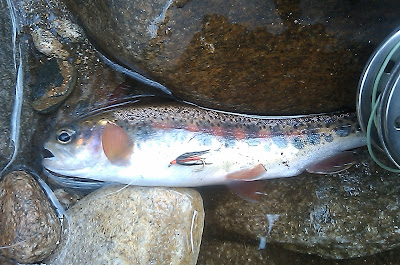 If you're going to lose the fly after one fish, the only ribbing you need is what you'll get from your friends!

Nice work on the squirrel removal, looks like it was one royal P.I.T.A.

Even better on the trout. It's a beaut!

I've been there before, twice. But the squirrels were still alive.... There won't be a next time. Glad you were able to make a harvest.

Joel,
Those crtters can find a way to access most anything, like my squirrel proof bird feeders.
Squirreltail streamers are fish takers.

I've stopped on the highway more than once to collect a roadkill fox squirrel tail so I completely understand. At least you didn't have an audience of strangers driving by that thought you must be out of your mind.

You're a better man that I. I probably would just keep using the chimney and eventually have a small animal cemetery up there.

Try that with a raccoon, Joel. Nice fish by the way. Glad you got out.

first and most important, That fish is perfect, Im thinking a paintjob is in order of the one wiht the fly on the belly,, good lookin bug too btw, glad yo got out. About the squirrel tail..... um, ya I can relate. Those silly bass are going to relate too come spring..
Unless your Kev2380 then your doing it now.

Wow - thanks for the comments guys:
TB-its a not so uncommon thing for me, just means I get to tie more flies.
TroutR - Truely a PITA
RoughF - Glad it was dead, would have hated to try and pull him out alive.
Brktrt - cant wait to use the tail for a fly or two.
Jay - I have never stopped to gather feathers or hair but I would be lying if it didn't cross my mind.
Kev - I ignored it last year and burned a fire for two days in hopes of toasting any small critter beyond anything the flies could use. A few weeks later the magots showed up and another HOT fire took care of them but I Was Not going through that again! This time I went with extraction and prevention.
Bgrrfsh - Kev gives me hope that the bass are out down south. We'll see if the bass like it as much as a rabbit strip.
And as far as the new header goes. I was just doodling the other day and tooled around with a photo editor to the point i though it might make a good tattoo or header - I went with the header...