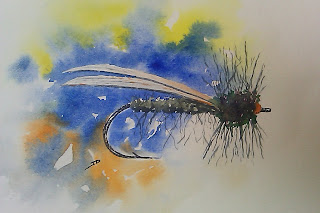 "... at the second cast there was a swirl like the explosion of a depth bomb, the line went taut and the rainbow shot two feet out of the water. He tore down the pool and the line went until the core of the reel showed. He jumped and each time he shot into the air we lowered the tip and prayed. Finaly he jumped and the line went slack and Jacques reeled in. We though he was gone and then he jumped right under our faces. He had shot upsteam towards us so fast theat it looked as though he were off.
After I netted him...He measured twenty six inches and weighed nine pounds and seven ounces. Thats rainbow trout fishing"

That little bit of classic fly fishing Lit was from my favorite author Ernest Hemingway in an article he wrote for the Toronto Star Weekly August 28, 1920. The strech of water he was fishing was the Soo in Canada but the imagery could be transposed to any number of rivers in North America and abroad.

For those that haven't read Hemingways Big Two Hearted River I suggest you take a look. There is also a good little bit of fishing in the classic The Sun Also Rises (also some bull fighting and partying in spain).
Posted by Unknown at 9:17 AM