The Greenback Trout (painting under the influence) 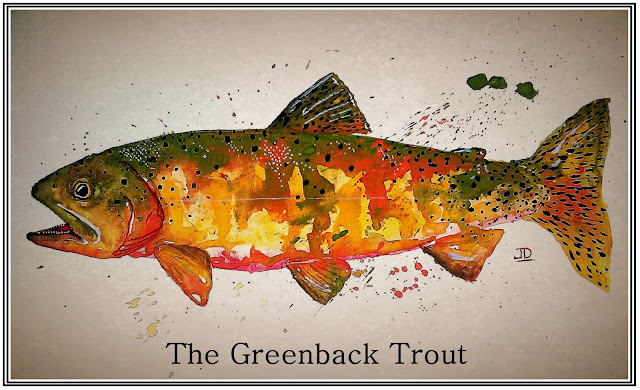 So what happens when I have a flash of inspiration after a few to many seasonal Blue Moons from the great state of Colorado... I go crazy and paint up a Greenback (cutthroat) Trout.
The Greenback -in case you don't already know - was once considered an extinct species until a few surviving groups of these fish were found in small secluded streams in the Rocky Mountain National Park.  Through careful re-introduction and the lengthy efforts of a few dedicated fly fishing groups like Trout Unlimited and the Greenbacks, this native fish has rebounded from the brink to become a poster child for native trout population conservation.  In 1994 the Greenback Trout became the official fish of the state of Colorado and solidified its status in American Fly Fishing lore.
I took a very different approach than I usually do when painting this particular fish.  Normally I have a fairly controlled style of brush stroke; clean lines and smooth blending.  But for this I had a bit of the Blue Moon rising in me and I went a bit crazy - tossing paint around and whipping the colors together until the desk and my shirt where also covered with a splattering of the bright pigments.  I must say that I liked the finish effect and although I have used a similar style of painting on other works - I find myself wondering why I don't let the paint flow freely more often. I suspect the beer helps... 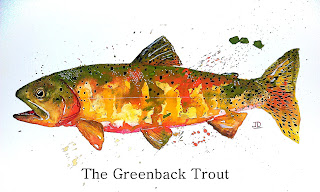 The Greenback Trout
- Watercolor and Gouache on Paper
- Size - @ 9in x 6in.
- Status - Available
Email Me for Purchasing
Posted by Unknown at 6:35 AM

I like! A lot. Keep the beer flowing, my friend.

nice, any beer in the paint, always helps with cooking. Note that they have found that most of what they thought were greenbacks are not and that a new strain in I beleive a Bear Creek is the true greenback.

What Brian said is correct. Be that as it may, I like. Sometimes in life everything isn't perfect. Not supposed to be...that makes it perfect.

Thanks guys, I defer to the natives from Colorado. That's what I get for relying on outdated information. They are still the state fish right? Regardless, they are a great fish still in need of protection. Also, no beer in the paint but rest assured , not a drop was wasted.

I love it! one of your coolest in my book! you put a slice of orange in that blue moon... or drink it like a man? lol

People drink it with an orange? Glad you liked it.

way better minus the orange, nice frost mug so its easier to chug. alot of things are better done with a little gas in the heater

I'm with you Blake especially with the temps dropping. Gas it up.

I found you via a Google Image search for a trout fly, listed on a billhead from Marshall-Wells in Duluth, MI. I put my art on old paper, and the art has something to do with the piece of paper itself.

The piece is not specifically dated, except for 4-1, although it came out of a ledger for the year 1901.

The fly is listed as Brown Archer Hackle Q.

There are 3 other flies listed that I have no problem depicting: Bee, Griz King and R Coachman.

Do you have any idea what the fly looks like?

Mr Cachet - I have run across your site a few times and love the stuff you do with bringing old paper back to life. As far as the fly goes - The Archer is probably one of those flies developed locally @ the turn of the century that never gained fame. I searched a number of old fly fishing books published around the time you mentioned but go no hits. I can make a guess just with the name though and suspect that the Archer is a wet fly dressed in brown hackle and brown Quill. This might be an opportunity to take some 'artistic liberties'and recreate this fly using information in the name as well as how standard wet flies of the period looked. I know this doesn't help much but I wish you luck. I'd like to see how it turns out.

Hey thanks, Joel. I wanted to make certain I wasn't being too much of a libertarian if I tied a fly for Marshall-Wells!

I can't keep fly paper on the wall. I've only done one fish, and that a Black Ghost many years ago.

pretty awesome what you can accomplish w/ a brewski! :)

Live to Roam is currently looking for quality blogs to represent themselves alongside some of the most unique and well known places in the world. Based on the quality of the content on your blog, we would like to offer you a location on one of our maps. Support the lifestyle, Live to Roam.

Texwis - there is a limit. Too many and all creativity falls off then I'm just another crazy redneck making a fool of myself.

Lucas - humbled by your opinion - I've been an admirer of your eye for photography for a while . Thanks

Dang if you paint that good with a light buzz I would love to see what comes out from a little absinthe.