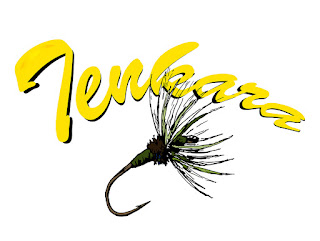 It has been far to long since I have posted any Tenkara related stuff so with a morning free to sketch I worked up a little Tenkara illustration.  I have been working on a project that has involved a whole lot of Tenkara research and illustrations so it just seemed like the right thing to do a post about.

While doing research and sketching out illustration ideas I inevitably went back though my logs and past artwork to get inspiration.  With that in mind I decided to share a few of those with you along with a few recent Tenkara outings. 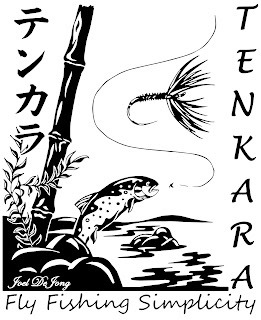 A few weeks ago I took the Tenkara rod up to the smokies but completely struck out.  I believe that it could have been the first and only time the fish failed to bite while using the Tenkara rod.  At the very least I have always been able to hook into a young trout or bluegill in a days worth of fishing but alas it was not to be.
When I got home however I took that Tenkara rod back out and with the kids in tow, we were able to redeem it with a bunch of large sunfish.  The kids love its easy use and simplistic nature and for a day on a local pond, you just cant beat handing them a Tenkara rod and watching them hook into fish. 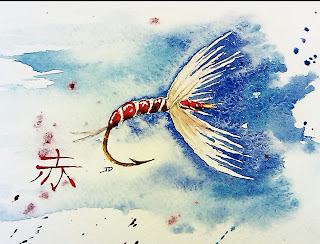 Personally I would have taken the rod out and thrown it into the trash can. Just kidding. It is unusual not to catch at least one fish on Tenkara. I've yet to strike out, but I don't use Tenkara flies. Awesome drawings.

Killer Black and white
Love the water color. what does the character mean if anything?

Mark - the thing is that I used both western midges and classic tenkara flies without a single bite. Just tough fishing.
Howard - many thanks
Kevin - I actually put this black and white on a brown tee. Still have a few if you want one. The Japaneese characters means Tenkara, or from heaven.