Weekend Trout Fishing With A Buddy 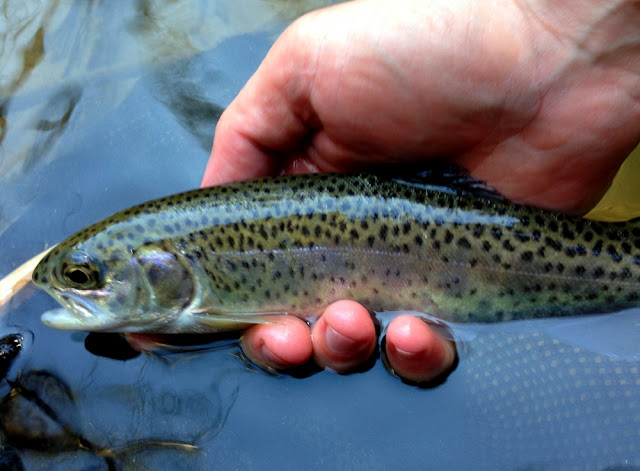 This past weekend a buddy and I took to the river and hooked up with a whole lot of trout.  Okay, to be honest - My buddy hooked into a bunch, I was more of an observer barely holding my own. 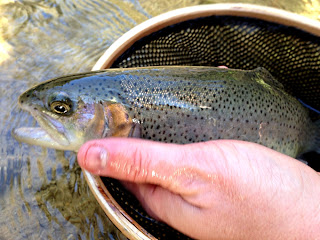 We had planned to head up into the North Carolina mountains and hit some of those storied waters that are loaded with fish but looking at the regs we realized that a whole lot of the accessible water was closed for the month of march.   So with North Carolina out of the running I began looking for plan B.
My buddy is a spin fisherman more accustom to bass than trout.  Even with the constant encouragement to give the fly a try he remains a die-hard spin man.  Unfortunately that limits some of the water he is able to fish so I went flipping through at a few books I had on the fly tying desk on SC waters looking for a good stream to fish.  Eventually I came across a section of river I had never fished. 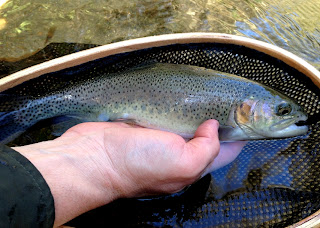 Truth is I never even knew that there was trout in it but after researching it I soon found that the section is heavily stocked in the winter months and during the HOT summer months a few even hold over in the very deep pools.  Occasionally anglers have even found natural trout in the more isolated sections tucked far away from the corn chuckers that never venture far from the road.  In short this was perfect for my non-trout fishing buddy.  We didn't want to stay near the road but I wanted to make sure he was going to catch fish.  I also wanted to have the opportunity to catch native fish.

Throughout the day my buddy was hooking into a whole lot of stocked fish while I watched with slight envy but still happy we were catching fish.  I eventually found a hole and hooked into a handful of very clean brooktrout on deep midges, SanJauns, and Killer Bugs.

After hiking up the stream and working the water along the way, we finally came to a deep hole that had been funneled between two cliff faces.  Scaling the rocks and clinging to the side of moss covered granite we mad our way into a section of the river I am sure few anglers have ever gone. 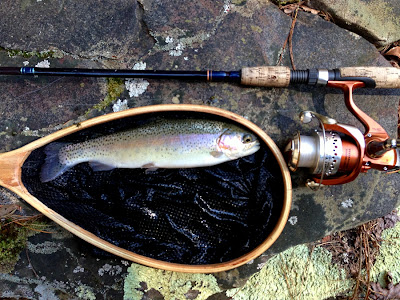 We stood on top of a rock that looked into the depths of the deep pool below and the monsters we saw down there were enough to get your hear pumping.  Dropping enough weight on the line to sink the Titanic I began to sink flies as deep as they would go.  My buddy did the same and in the next hour we caught a bunch of fish.  Of course the spin rod and salmon eggs won over the stockies but occasionally we would hook into a native or hold over trout.  My buddy was amazed at the noticeable  power that native fish had.  After pulling in a nice 13-14 inch stock trout he then hooked into a native rainbow and thought he had a whale.  It turned out to be only 9-10 inches but the power it had and its aggressive nature had both of us fooled.  Lesson for the day - nothing beats a stream raised trout!
In the end we left the stream happy and dehydrated.  On the way back to the jeep we even managed to grab a few beat-up stocked trout for supper.  At home, over beers and broiled trout, we reminisced with our family and friends over a great day on the water.
Good by winter blues and hello Spring Fishing!

Some nice bows you have there Joel. By the way, can you hook me up with a payday loan?

Swamp Y - besides the stockies with messed up fins, their colors were real nice.

Howard - thanks. I'm finding it real hard to keep up with the spammers. I hate to do it but I might have to add the comment moderation back on. Any more 'hello human from administer of blog...' I swear

When you say NC mtns. Where were you thinking of going. Around the Asheville area or to the east of that?

Hey Joel. I'm glad you guys had a good day. When I take somebody it's usually a bomb and if somebody brings a friend and builds me up as the "great" trout fisherman, watch out......It's really bod.

Kevin - sw of ashville actually but if your thinking of hitting waters east of there let me know - I'll make the drive.

Brktrt - not pictured. My buddy had the camera and with salmon eggs he killed the stockies. I had a few nice native brooks but the pics I took didn't do them justice.

Mark - that's why we hit a stocked stream. No need to show him how my day usually goes. ;-)

Looks like a good day was had.
I was kinda wondering what you meant by being a spin fisherman "limits some of the water he is able to fish," and then I thought maybe it's his particular choice of spinning gear and lures. If it's fly only waters I could understand, but the places I've been with regulation like that are typically "single hook lure or fly only." If you use single hook jigs on ultralight spinning gear, especially things like "Trout Magnets" you can do equally as well as any fly fisherman... probably better in a lot of places. Does he just not have anything in his tackle box without a treble hook? Just curious.

Jay, although he had a few lures and there were a few places in nc that we could fish I knew he was planning on using salmon eggs so I bet on a stocked stream for his best chance to catch a lot of fish. Unfortunately all nc stocked streams are closed in March. Not being a regular trout fisherman I really just wanted to put us on fish - get him hooked - then later we will search out the prime natives using artificials. I didn't want him exposed to my regular 'one/two' fish days right off the bat.

Gotcha! When you find the right spot, be sure he has some "Trout Magnets" in his arsenal. You can cast the small ones with a fly rod too, and they're hard to beat.

Jay - I'm with ya. Before I took up fly fishing many years ago I used something similar to the trout magnet as well as the treble spinners with great success. I'm going to have to pick some up for him next time and get him off those eggs.