Ideas often come to me while I sleep and the other day I was hit in the middle of the night with an idea that drove me into action the very next day.  I have always admired the vast fly display cases in the fly fishing stores.  Beautiful wood filled with all sorts of flies as far as the eye can see.  I asked myself; 'wouldn't it be awesome to have that next to my fly tying table?'.  Well when I awoke I was struck with the idea to make a small version of this concept with a artistic touch.  Thinking it over I wasn't to thrilled with making a box from scratch - it more work than it looks like - so another idea came to mind.  Re-new and Re-use!!! 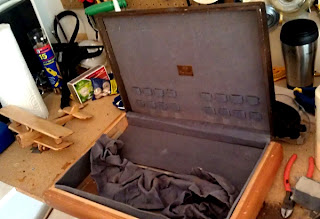 Everyone has seen these raddy old silverware / flatware boxes in antique shops and garage sales but has anyone ever seen this felt inlaid mess and thought - Now that would make a perfect Fly Display Case!  Well I did and after breakfast I  quickly made my way down to the local goodwill store to see if they had a specimen to fit the bill.  Wouldn't you know it - they had one.  It was my time to rescue this discarded box from the rubage bin.

It was beat-up and broken but that only helped me get it for a steal.  I snatched it up and went home to rip the guts out of it.  One thing was for sure - this box would never hold another piece of tarnished silverware.  This old box was going to hold Flies! 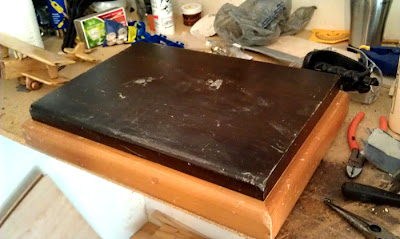 Stripping the old varnish and sanding down the surface took some work but when you have a vision on how a piece is going to look once completed it drives you to complete it that much quicker. 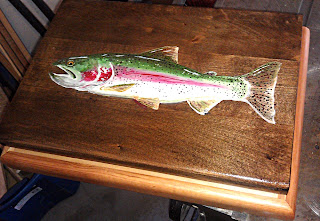 I repaired a few scratches and fixed a spot in the back where a hinge popped loose from the wood and then I re-stained the top lid and oiled up the inside and outside of the base.  I then took the lid inside for an original touch that would really make this box stand out.  Using acrylic paints I painted a rainbow trout on the lid and then added a triple coat of varnish to ensure that the artwork would be protected.  The result was a stunning painting on a walnut finished plank of wood.

Moving my attention to the inside I stripped off some wood and notched them to form a bunch of compartments for the flies.  I then oiled them up with tung oil and glued them together to the bottom of the box. 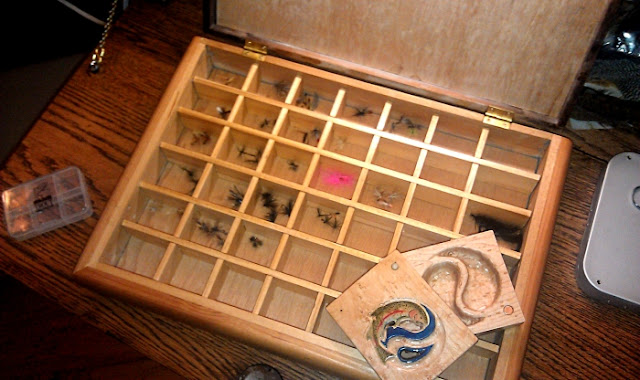 The next step is to fill it with as many flies as my tying station can produce.  It has 42 compartments at about an inch and half each and I suspect it will take me some time to fill it.  I emptied my Tenkara box I made last spring as well as a box that was holding recently tied flies from my desk and it barely made a dent.  Guess I had better get to work tying up flies.
Halfway though the process I thought to myself - hey, this is something I could sell (and I might eventually) but for now I am enjoying this box.  My loving wife just shakes her head.   First question she has at the start of every project is - where are you going to put that, quickly followed by - I bet you could sell that.  She puts up with it though and for that I am appreciative.