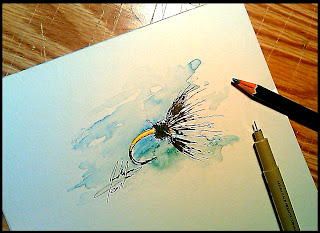 Starting out with a new little Tenkara Style Fly and a treasure hunt.  Your reward - discovering a great blog!  Can you find the Tenkara fisher who posted this bee inspired Tenkara fly?  Good luck. 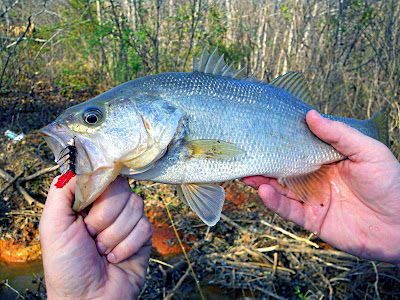 Also an update on the search for bass on the fly.  I took the new old rod out for another spin the other day with my father in-law and a buddy of mine and hooked up with two nice little fish.  We arrived at the pond a little late and just on the tail end of the prime feeding time to find a muddy wash from the previous weeks rains.  Despite this we tried out best to throw a bit of top water action without any action and then switched to some deep swimmers.
For my fly I tied on one of my quickly tied buggers I threw together earlier that morning.  Black hackle and a crystal & red wool tail, it took these two without little effort, and I mean that literally.  The bass hooked up by itself.  What happened was I tossed the fly and about ten feet of fly line out into the pond and then turned my attention to untangling the line that had wrapped itself around a bunch of thorns.  about 2-3 minuted later and the tangle taken care of I twitch the fly off the bottom and felt that heart stopping tug.  A quick fight and a few healthy jumps and the bass was in hand.  Sweet!
The little crappie was taken much the same way but this time on purpose - taking what I learned from the first hook up.  Notice that the little guy still has his deep water color which tells me that the water is not quite warm enough for these bad boys to be cruising the surface.

All in all these two were the only fish caught that day and despite my insistence that my two fishing companions put down their spinning rods and try my fly caster, they kept to their guns.  I figure that if I continue to out fish them with a fly rod then they are bound to cave in one of these days. 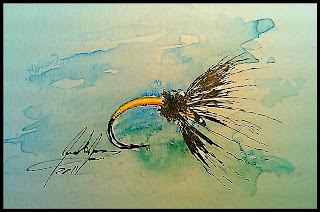 Well done on the Tenkara fly.
Just wait til Kiwi see's that.

You made my day!

Thanks Guys
Tenkaraonthefly - goneflyfishing - glad you approve. Thanks for letting me poach your fly.

Like the painting of a Steelhead/cutthrout reverse spider by the ledgen Al Knudson,the detail is beyond belive.