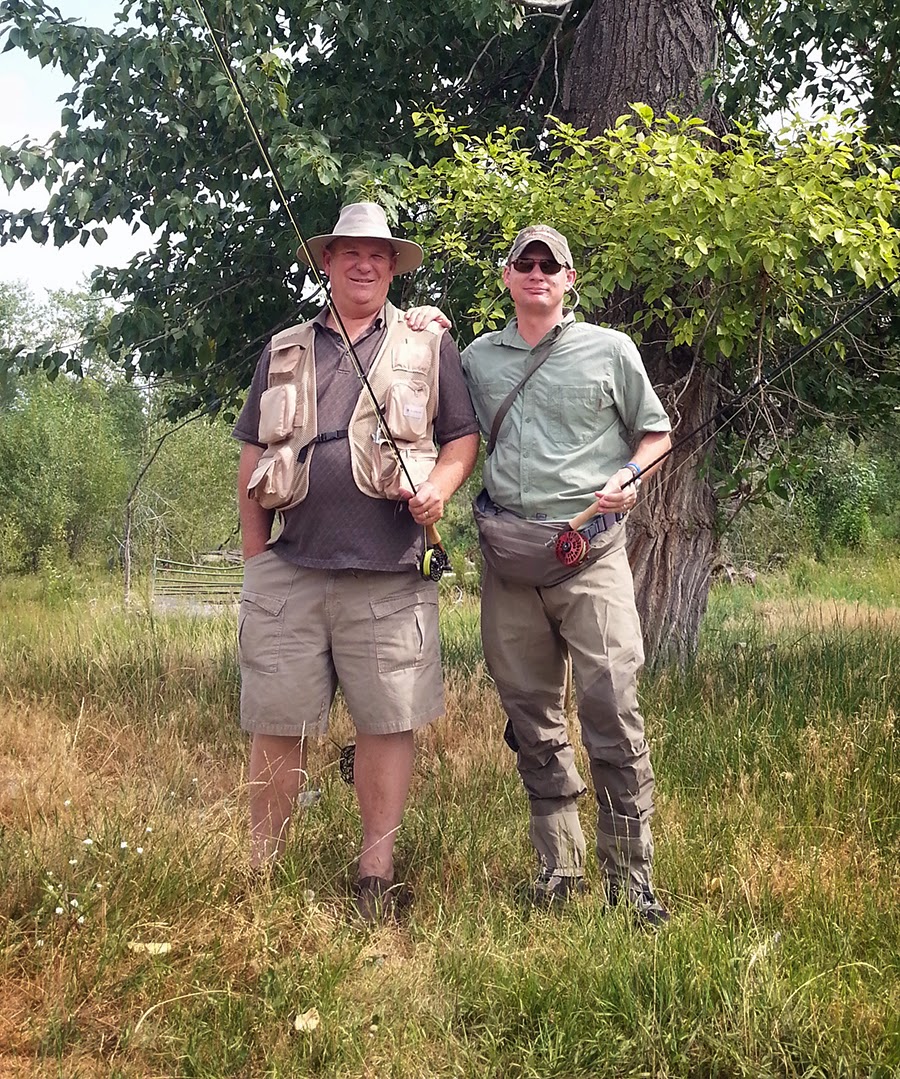 I was lucky enough to have a few days off and so with the blessing from my wife I packed up my new 6w rod and set off for the mecca of fly fishing - Montana.  Connecting through Salt Lake at 10 am I boarded a plane that had no less than 30 other heavily armed fly fisherman in search for those fantastic summer waters of the Madison and Yellowstone.  With a destination such as that one cant help to smile as you circle the valley of Bozeman while the plane lines up for a landing.
For me it was a two part trip.  Not only was it a chance for me to angle for wild Montana trout but it was also a chance to spend some quality time on the river with my father, who is just in the beginning stages of learning how to cast a fly.  He had always been a fisherman but since he has moved to a place with such legendary waters and devoted fly fishing community he has picked up a good fly rod outfit and began the frustrating and rewarding pursuit of fly fishing.  As he puts it 'The trout give him just enough to keep him coming back, but that's about it'.  Last winter in a frozen section of the Madison he hooked into a rainbow of a lifetime and I sure wish I could have been there to see him pull it in.

My goal was to simply hook fish.  I didn't dare to dream of big fish or legendary battles.  All I wanted was a few days on the river with eager fish to battle.
So when the plane landed at 1pm and I met my dad the first thing we did was to head over to the Fin & Feather fly shop at Four Corners right next to the Gallatin River for a few flies and a licence.  By 3 we were on the river which has to be one of the quickest airport to river times in history.  The following pics are just a taste of the great fish and scenes I had on the trip. 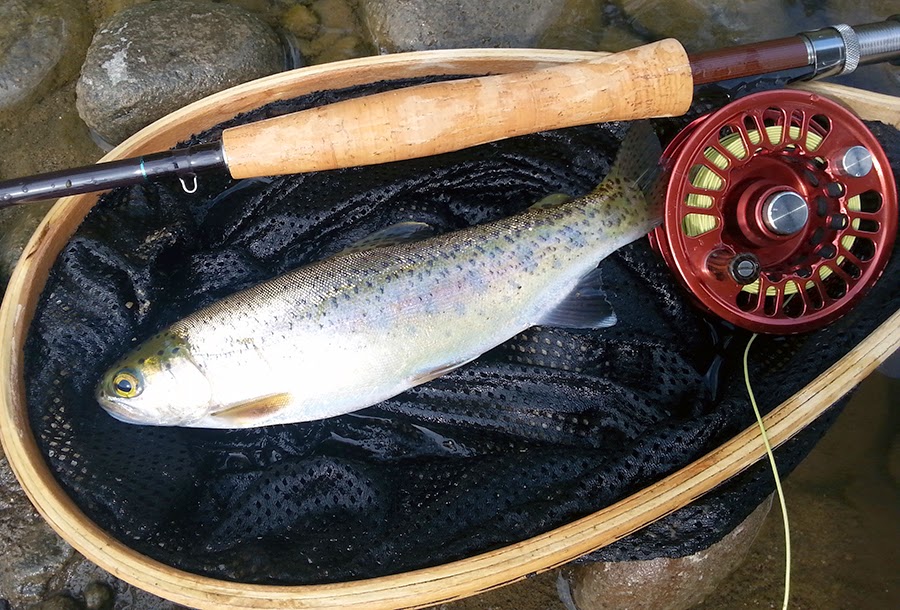 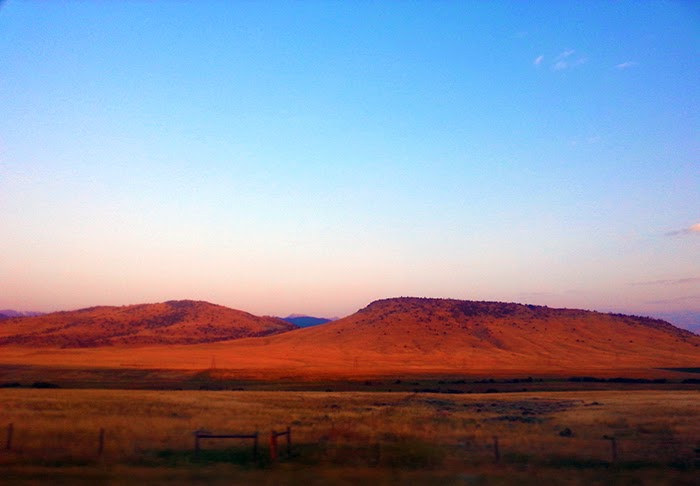 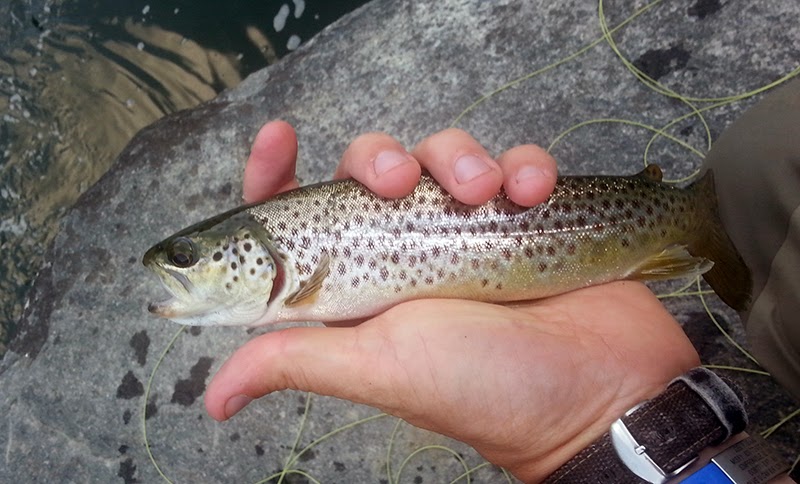 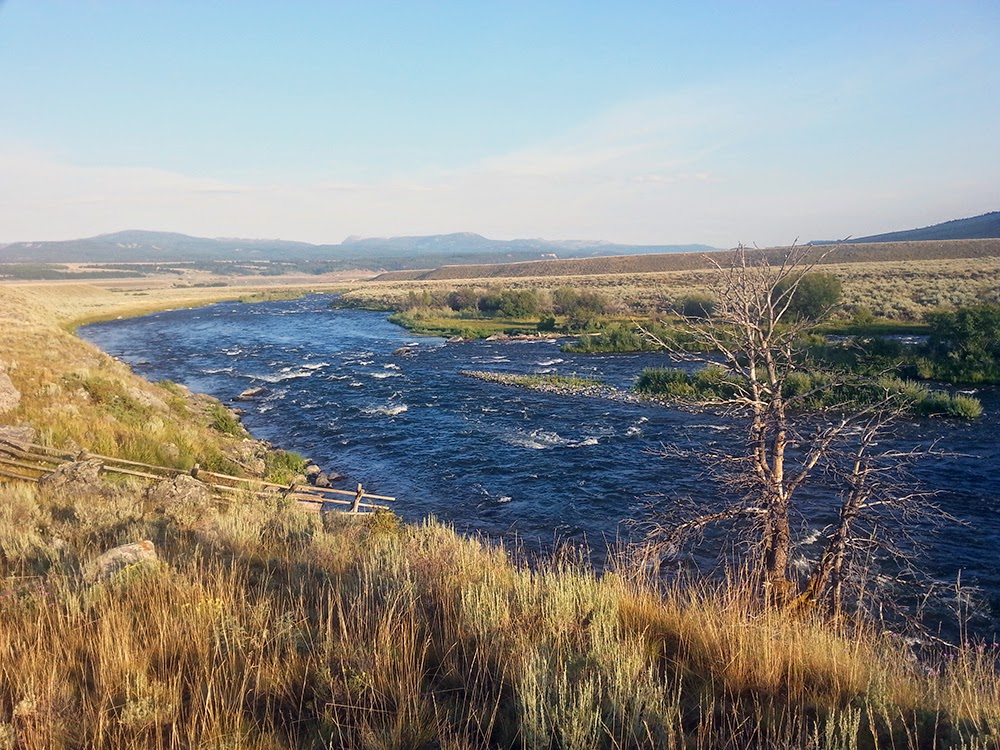 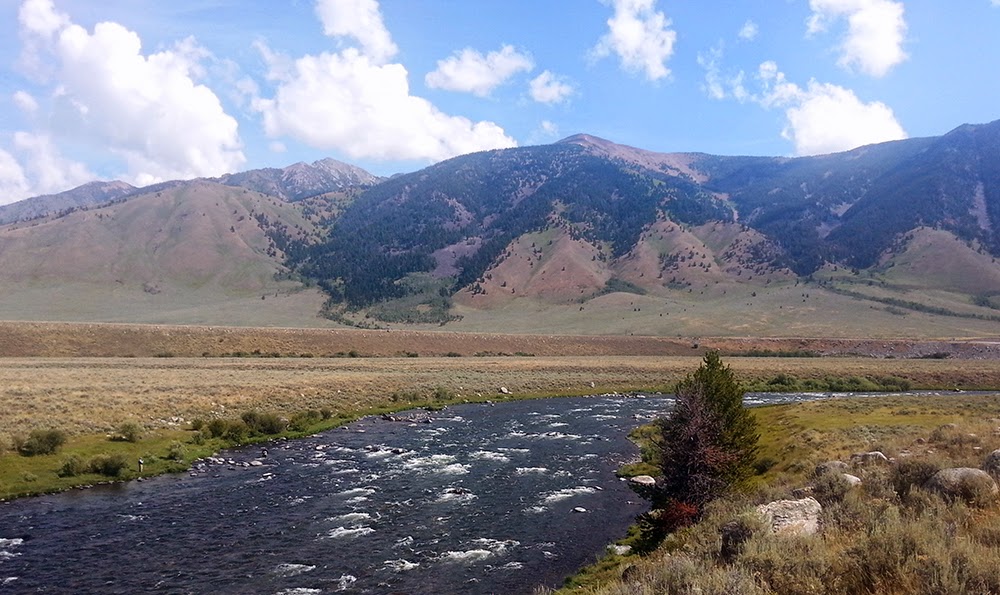 On my last day we took to the Upper Madison where we were told that the fishing was hot and heavy.  As it turns out we must have missed the big fishing because after six hours all we had show for our effort was a few very small cutthroat and a sunburn.  Of all the other fisherman on the river with us we only saw one other guy and his guide hook into a six inch trout so we moved to another local slightly down stream. 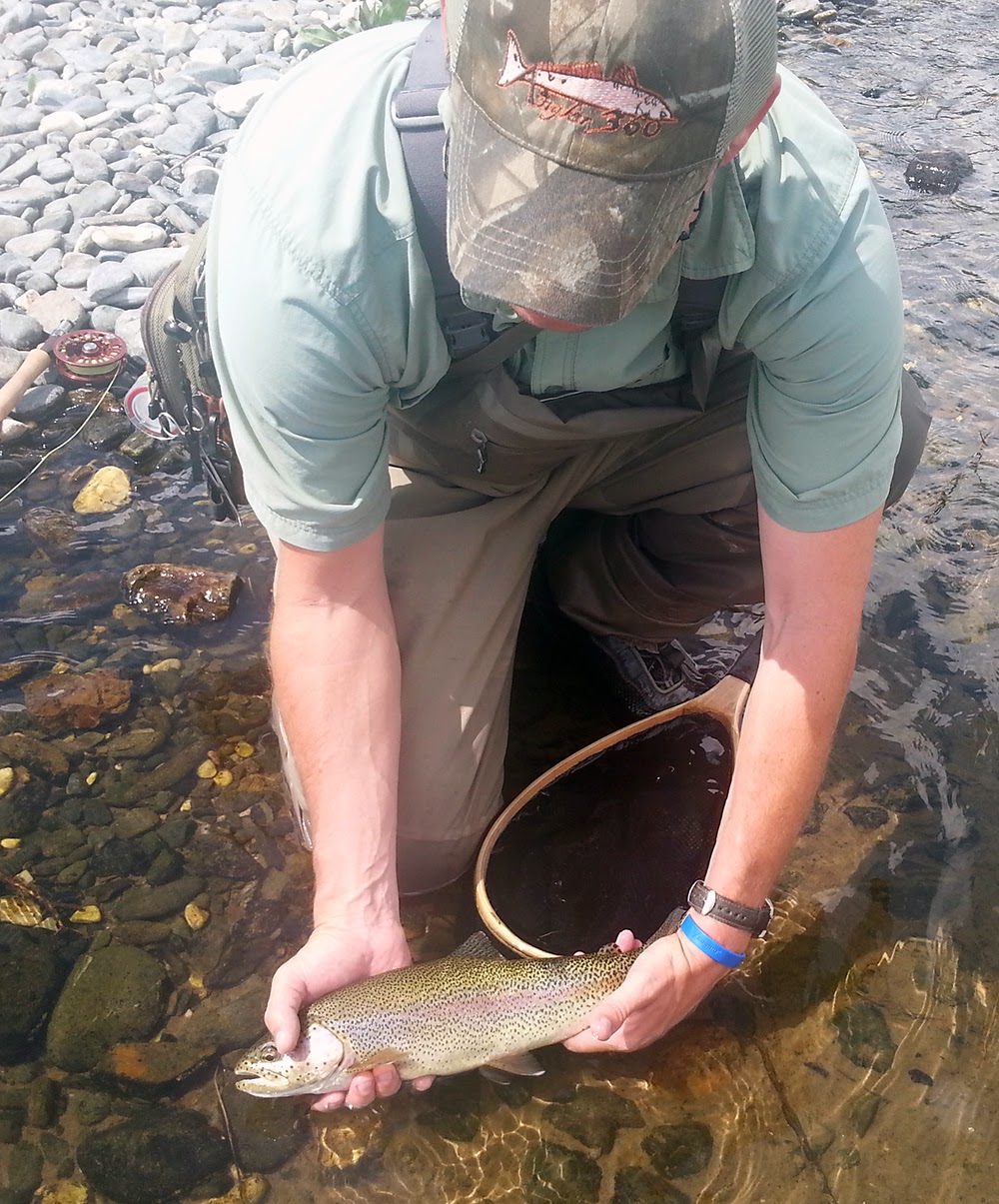 It was there that I hooked into one of the better trout in my life.  The size is surely not the biggest and the picture does it mo justice but this guy fought me hard for the better part of fifteen minutes in a stretch of very fast and powerful water.  Of all the fish that I have hooked into in my career I have put not more than two trout on the reel and only one of those tested my drag.  This guy hit my rubber legged stone with a fierceness of any eastern trout three times his size.  Immediately after hooking him he ran and made my Abel reel buzz until I had to chase him down river.  With my backing threatening to show he held up in a little eddy where I was able to gain on him.  He made a total of four more runs just like the first and by the time I actually had a net on him he had dragged me down river more than 75 yards.  After letting him rest I gently released his tail and he swam away to do battle again.  It might not have been a record rainbow but it was surely a memorable fight with the prettiest and most powerful fish of the trip. 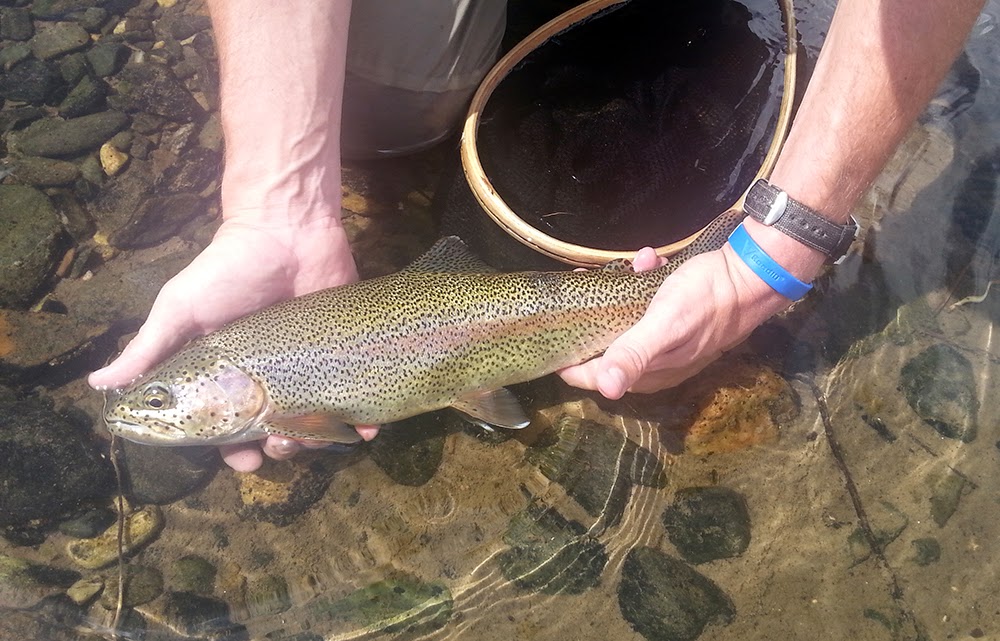 For me it was my last fish of the trip and a good one to end on.  With a fierce hail storm and thunder echoing through the valley, we packed up and headed home tired but elated.

A day later I was back at work but the memory of those few days with my dad and Montana trout will last for a lifetime.  If you have never been lucky enough to see the beauty of the big skies of our country, then do yourself a favor and book your trip now.  It truly is one of Gods masterpieces... 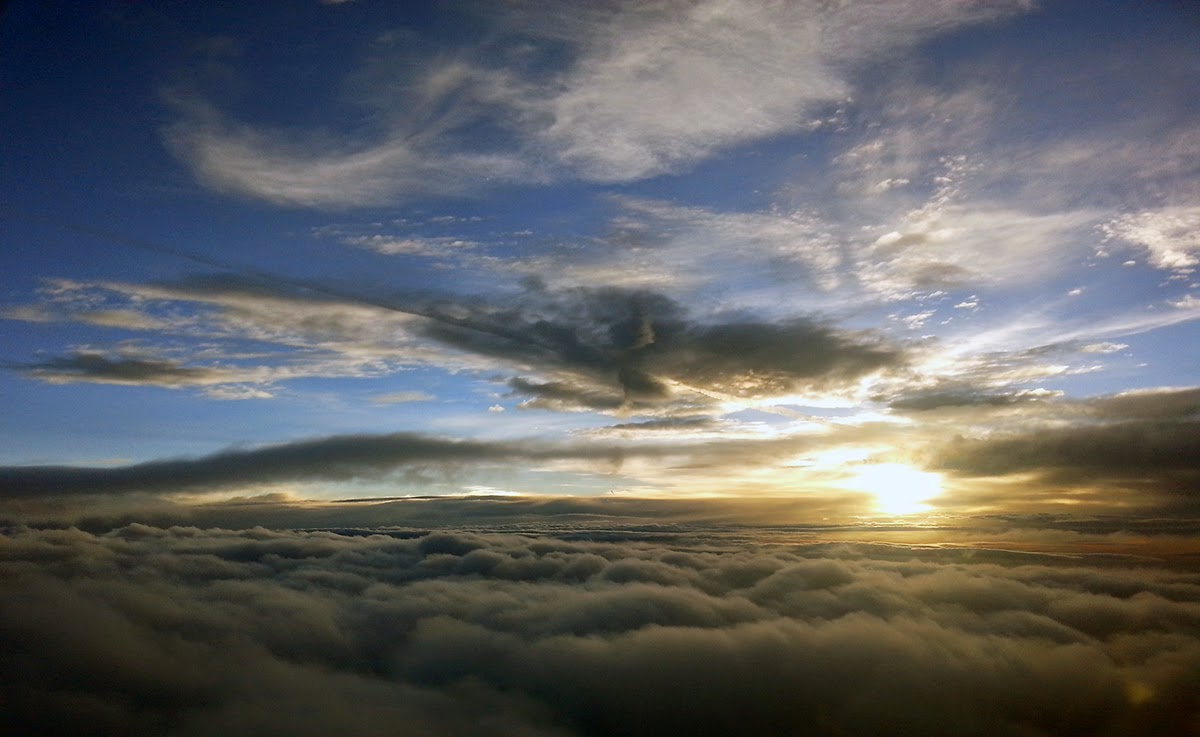 I don't know what has allowed your artistry, photography and writing to blossom, but keep drinking it, whatever it is. Fantastic story.

Joel, what a great post to share. Now, I have read hundreds of blog posts on fishing the Big Sky country. But this one, seemed so fresh and enthusiastic, that it tripped a trigger for me. Great to see Dad getting into fly fishing. BTW, your last fish reminds me of my "Rainbow Chaser" days.

Joel
For me this is the ultimate trout fishing adventure. It is a place on my list to fish before I hang the fly rod up. I can relate to the father/son fishing trips, my son and I made a great trout trip today which I will be posting in a few days. Glad you guys had success. thanks for sharing

I'm glad life is treating you well. I read you're article in Southern Trout about Tenkara. I just bought a rod and your tips should come in handy.

Love that part of the country...looks like you had a fantastic trip!

Joel, I'm insanely jealous. Glad you had such a great time with your dad. Photographer too huh? Nice job.

- Age Kevin, good things come with time... and lots of practice.
- Mel and Bill, many thanks. Montana in the summer is just one of those special places that cant help but to inspire.
- Kevin, you wont be disappointed in the Tenkara setup. Its not ideal for all situations but it is perfect for a lot of them. Hope you hang some big fish.
- HPD, It was awesome!
- Howard, I still have Colorado on the bucket list so you and the Greenbacks be warned.