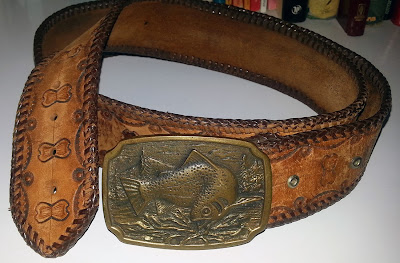 After a long absence from this hobby thing, I wanted to share a bit about my Grandfather.  The belt you see here is a hand crafted piece of work done by my grandfather nearly 40 years ago.  Part of the reason I have not posted anything recently was because my beloved grandfather passed away last week.  Buried with full military honors - complete with gun salute, and taps - my grandfather was a veteran of World War 2.  At the age of 17 he joined up and served in the Pacific.  He also was an almond and walnut farmer in the central California valley, a carpenter, and a dedicated fisherman.  He was a God fearing dedicated family man that raised a large family with my grandmother on a farm that dated back to the turn on the last century. 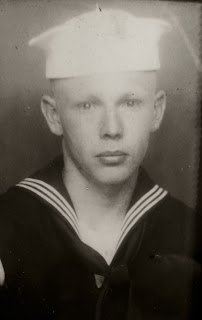 When I was a little snot, I remember watching as he helped my father build our first house in the mountains of California.  He was a tireless worker at everything he put his mind to doing and worked every day to provide a solid home for his family
Before I was born he was working on framing up a house and took a spill from a second story roof and busted nearly all his bones in his hand.  As part of his rehab he made this belt.  Some of my fondest memories of him were us on Lake Don Pedro and Pinecrest Lake in hills Central California as we trolled for large lake trout.  Using lures that he hand crafted and cut from copper pipes he had shaped into deadly effective spoons, we would troll around all day till the limit had been reached and then head back to do the cleaning.
Needless to say, I was extremely honored to be given his belt.  I cant think of a better way to remember my grandfather than with a piece of his artwork he used.  It is something I can tell my children about and it is a great way to remember a life well lived.

Hi Joel. Sorry to hear about your loss. My condolences. He sounds like he was a fine man.

Condolences Joel. We are losing the Greatest Generation and it is our loss. May your grandfather rest in peace well deserved.

Sorry to hear of your loss, Joel. I am sure he was everything you say and more. May he rest in peace.

My condolences.
You now have a part of him.

Sorry for your loss. You have fond memories of your grandfather and those can't be taken away. Oddly enough...the California Quail artwork I purchased from you hangs on our wall a stones throw away from lake Don Perdo! Take care Joel!

Sorry for your loss Joel! Thank you for sharing your grand father and I am glad that he was honored for his service on his journey home!

I'm sorry for you loss Joel. My grandfather was a huge part of my life. I was crushed when he passed but I also felt lucky I was able to know him.

I appreciate all condolences. Our family have been blessed with lots of good memories and we are comforted knowing he lived a full life and has returned home.
Many thanks.

My condolences to you & your family.