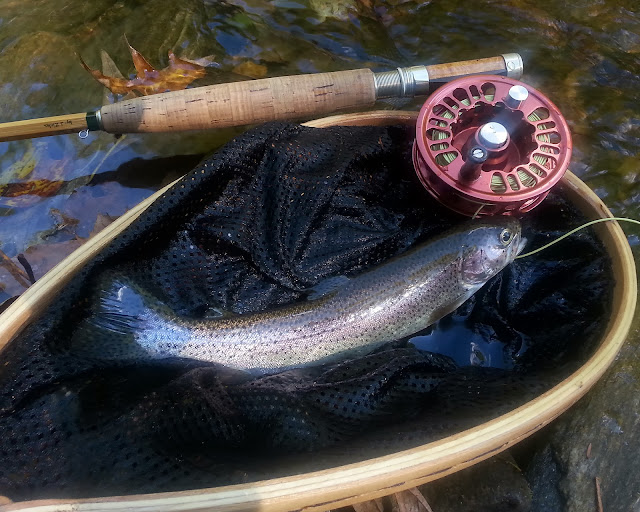 Yesterday I had the rare opportunity to drive the hour and forty five minutes to fish one of my favorite rivers in the South East.  For those of you well versed in geography and useless movie knowledge, the Chattooga is the legendary river from that Burt Reynolds movie - Deliverance.

Down here in this part of the country that movie is mentioned in hushed tones of disdain because of ...  well lets just say the locals don't take to well to being portrayed as toothless hillbillies that yell out 'squeal like a pig'.  Personally I like the stigma of the river - It keeps the tenderfoots away and lets me fish a beautifull river in utter solitude. 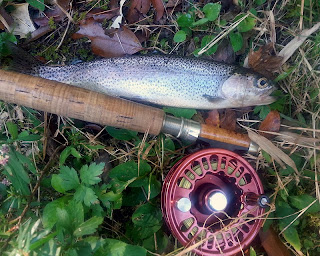 So on Thursday - with the in-laws wanting to visit family in upper GA and my family in tow I managed to get them to agree to drop me off at the hwy 28 bridge on the Chattooga river.  It is a section of river I know all to well as it was one of the first stretches of water I ever fished as a fly fisherman.  I have never been skunked there as far as I remember and even in a driving rain I have been in awe of the beauty of the place
Packing up the Fall River Fly rod and my beloved Abel Fly Reel we made the journey out and with clear instructions on how to get back to the place they dropped me off, I headed out alone.  As they drove off I half wondered if they could find their way back though the tangle of back country roads. 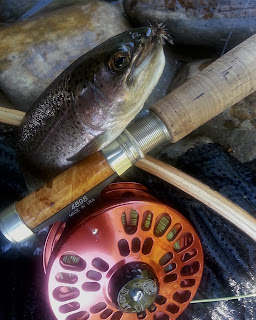 Stepping into the cool clear waters You cant help but be struck with the thought that the these waters have been flowing through these hills un-disturbed for centuries.  The waters I am about to fish have been fished by countless anglers including the native Americans, pioneer settlers, and who knows who else.  It is a true national treasure but unlike the waters of Yellowstone and Yosemite, this gem is still open.  The government has no strangle hold on this slice of public land.  This morning I saw a cartoon in the paper that had the Ranger chasing Yogie Bear out of Jellystone with a forty five, a sign in the background simply said 'due to the government shutdown all national parks are closed.  I chuckled a little and then thought how we got here.  How did our lands cease to be Our lands and how have we allowed the government to grab so much power from the people that they are suppose to beholden too? 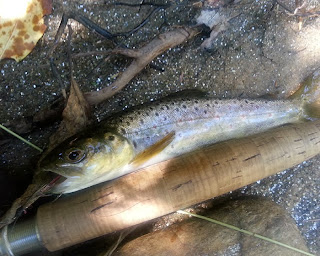 Away from the chaos of the government and ratcheting rhetoric from so called news outlets, I began casting my line for the trout that inhabit the Chattooga.  Starting with a little green drake I tried my hand at dry fly fishing but with no flies rising I knew it would be a tough proposition.  Quickly I switched to a heavy nymph - Hairs Ears - then the go-to Pheasant Tail.  After an hour with nothing but a brief glimpse of a tail I switched over to my standby - The Blacknose Dace.  Immediately I had two fish follow the dace but turn away at the last moment.  My conclusion was that the streamer was just a bit to long but after looking through my box I realized that the only smaller bucktail in stock was a little rainbow bucktail in size #10.  I tied it on and let it rib.  From then on I was living in high cotton. 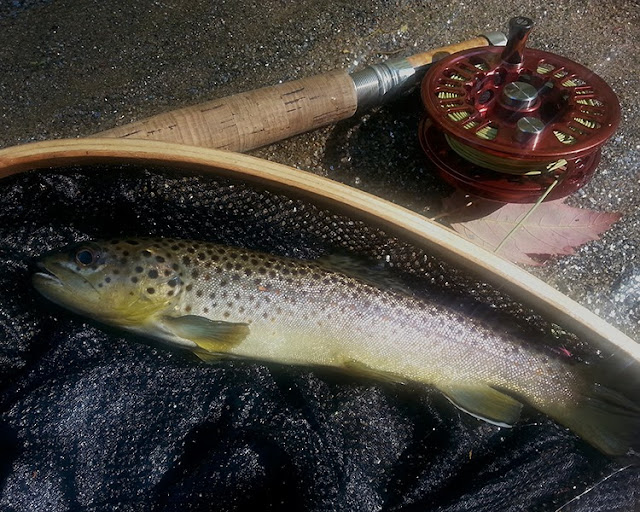 One after another bows and browns were feeding on the little rainbow bucktail without hesitation.  Tossing the light streamer with a sinker about three feet from the hook gave the bucktail enough weight to get down to the fish and was still easy enough for the Fall River Bamboo fly rod to give a great cast. 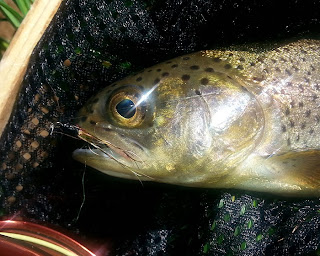 Its a good day when you loose track of the number of fish you catch and today was a GOOD day.  After about the tenth or eleventh fish my poor little #10 rainbow bucktail had had it.  Unfortunately as it is nearing the end of the season and I haven't yet replenished my fly boxes, the #10 was the last of its kind and I did my best to nurse it along but the rough mouths of rainbows and browns had done their damage.  When it was retired, all that was left was a few colored hairs and the unwinding black thread that use to hold the fly together.
For a brief moment I contemplated tying on another blacknose dace but a rise of a grey fly from the waters at my feet told me that it was time to give the dry fly another shot. 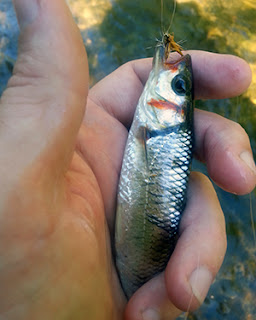 My choice was clear.  I tied on a #16 Adams and let her rip.  In short order I had another run of fish making their way into the net.
Looking at my watch I saw that my time on the water was nearing an end and after a final cast with a caddis pattern that yielded a large Dace, I packed it up and started down the path for the nearly two mile walk back to meet my ride.  Another great day on the water and another load of trout (and one Dace) to add to the legacy of this river.
Without a doubt I would have to say that fishing with great equipment added to the pleasure of the afternoon.  The Fall River bamboo fly rod and my fantastic Abel Fly Reel are so greatly paired for each other that they should have been sold as a set.  The two pieces of equipment are a thing of beauty and do every fish justice that are pictured next to it.  I would have never thought such a combo of fine quality equipment would have impacted how I fished but it truly has.  It is shear joy to cast to beautiful fish on a stunning river with flawless equipment.
Posted by Unknown at 9:36 AM

Joel
I really enjoyed this post, what weight/length fly rod were you using, and what size reel was you using? When I say size reel, I am referring to the dia. of the reel and width. Thanks for sharing

Sounds like a wonderful day, the kind you thankfully remember for a long time!

Good that you got out. I remember when Deliverance came out. Weird movie.

Great pictures and nice story, you can paint and tell it with words too.

Nice pics! Thanks for sharing your great day spent chasin bows and browns!

Mark - yes it is but dang is it a beautiful river.

MR NOCO Nympher - thanks, glad you enjoyed hearing about it.

I'm not big on trout but that rod makes me wanna cast it.

Riverwalker - if you don't like the trout then the chattooga is still your kind of river because a few miles downstream is some of the best redeyed bass fishing in the southeast. The bamboo held its own against those bass as well.

@Riverwalker~ if you would like the opportunity to cast one of our rods, we may be able to work something out with you in regards to hosting one for a couple of weeks...especially if you would be up for doing a gear review on your blog. You may contact me here if interested:>
Julie@fallriverrods.com

And Joel~! so pleased to hear you are still loving your South Fork! Makes me happy :-)

Julie - nobody is as happy as me regarding the rod. Simply a thing of beauty to cast. I also forwarded your comment on to Josh at riverwalker. Thanks again!