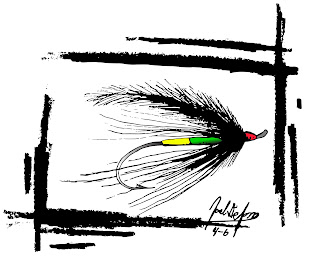 This isn't much of a fishy post but it is what I filled my time with today.  I only had one day free this week and I had planned to go turkey hunting but the rain did that in and my buddy bailed on me.  My backup plan was to hit the trout waters but again the rain played against me and blew out the rivers.  For a plan C I sketched a little and finally got to work racking up some honey wine I had been working on for the last few months.
After sharing a few to many Larceny Bourbon drinks with a friend last night I managed to wake up before the after effects took hold.  With a strong cup of coffee and the days activities laid out I keyed up  some Robert Earl Keen on the stereo and got to work
Last October I set up two gallons of mead; one was a strawberry and the other was a raspberry.  Throughout the winter I watched the power of the yeast cultivate the sugars into a bubbling stinking brew.  Eventually the frothy foam gave way to a clearing rose of liquid with a good amount of dead yeast and honey fruit collecting at the bottom of the jug.  I honestly could have racked the concoction about two months back but I could never find the time.  Today I had the time and after measuring the alcohol content I am glad I waited.  The strawberry was around 13-14% and the raspberry was at 12% but the taste was still tainted by the muck at the bottom of the jug. 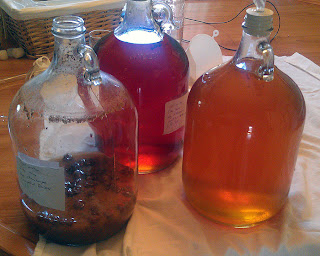 After transferring it to the fresh jugs I cut it a little with some more honey water.  Not only did this bring up the volume back to where it needed to be in the jug but it will a sweetness one expects in a mead.
I'll end up giving this racking a few months to settle out at which point, depending on whether or not the fermentation process starts up again with the addition of more sugars, I see if it needs to be racked again.
As with all good things time is key.  Of course if it ends up tasting like gasoline then at least I'll have a tax write off for my new home grown green fuel.
Posted by Unknown at 4:54 PM

The only thing I didn't see is a pewter mug. Every renaissance man has to have his pewter mug to drink his mead out of, doesn't he?

You got me smacking my lips. Sounds like it makes for a fun winter activity, and a tasty spring celebration.

Mark - absolutely. I'm keeping my eye out for one with a big trout or mayfly embossed on the side.

Jim - let's hope. My initial taste the other day was not something I'd share but I'm hoping once the muck was cleaned out the mead will mellow out.