I finally had a few days off and of course decided to fill them with two thing I love: Fishing and Hunting.  So on Thursday I packed up the jeep and headed for new water up in NC.  The Green River is mostly known as a river frequented by those that like to raft the steep rapids and deep pools but it is also a river that holds trout.... Or so I was told.
Truth told, it is a river supported by the NC fish hatchery but that did me no good.  I spent six plus hours fighting the current and casting to imaginary shadows only to end up with two small bites and not one single fish in the net.  Even without a fish to show for my effort it was a relaxing day filled with beautiful water, amazingly swift falls, and wonderful spring weather.
One thing that did catch my eye as I climbed out of the canyon was a huge millipede.  Pausing to take a few photos I made a note to myself to research this gigantic insect as soon as I got home.  To my surprise I found out that this gigantic millipede is actually called the American Giant Millipede. 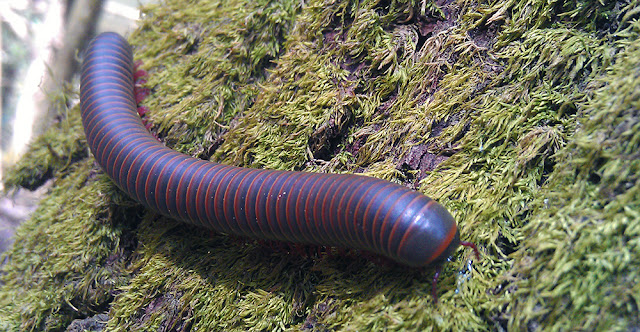 (American Giant Millipede (Narceus americanus) - Narceus americanus-annularis-complex) to be exact.  I also found out that it can grow upwards of four inches (this one was all of that) and when agitated can produce a toxic chemical that can cause severe eye irritation up to three feet away with the possibility of temporarily blindness.  In short - Look But Do Not Touch.  If you can get over the creepy factor of so many legs, this insect was an amazing creature and as colorful as any butterfly.
After taking my pics I packed it in and headed home for a quiet evening with the family. 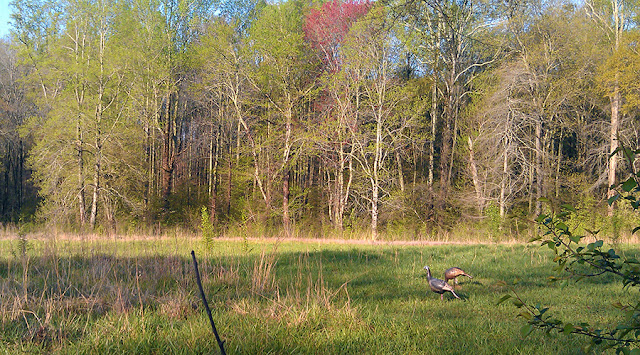 For my second day of life in the outdoors a buddy and I too our chances hunting turkeys. After waking up at 500 for a 530 departure I strolled over to his house to find that all the lights off - a sure sign of either a faulty alarm or somebody that has decided that not even hunting could get him up that early. 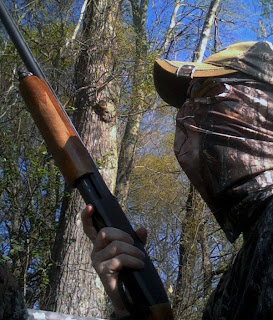 Knowing my buddy I bet on the faulty alarm and proceeded to send him a barrage of taunting text messages as I sat on the front porch - shotgun in hand.  Eventually he showed up and with some excuse about hitting the alarm one to many times.  We soon packed up and hit the road which was good because if I had been sitting on that porch any longer I'm sure the paper guy would have been calling the cops to report some lunatic in a rocking chair with a shotgun.
Long story short once again, No turkeys to show for the effort but we did at least managed to see one big tom and call quite a few.  In fact I had a lengthy conversation with a few toms from across the tree line.  It went something like this:
What I thought I was saying - "Here turkey, turkey, turkey.  I only want to see your pretty beard. I'm a hen and am lost.  Please come find me."
What they heard - "gibberish.... #$#%$%,....@#$@#$^...Come here so I can blow your head off".
What the turkeys said in response - "What! You have got to be nuts.  I'm not going out there.  Instead I am going to sit here in the trees and taunt you with my senseless babble for three hours.  Oh, and by the way your turkey calls suck.... I just wanted to tell you that." 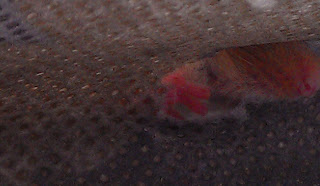 It was still a beautiful morning full of the bluest skies and clean crisp air that can only come after a night of spring showers.  Watching the butterflies song birds and finches flutter around the blind I got to thinking.  An observant hunter or fisherman might be more in tune with nature than those in Washington that make our laws and rarely if ever venture beyond their door step. - Just a thought - We should institute a new program - Take a politician hunting month.
The little nose  poking out from the camo blind was a little field mouse that had made our burlap his little home.  As we sat there about five inches from my buddies face, this little guy chews through the burlap and looks right at us and then continues to do his morning house building. 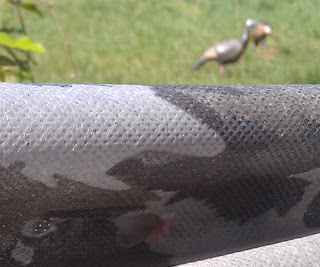 We left him be as we continued to fruitlessly call to the mocking turkeys.  He wasn't hurting anything and since we were in his domain we figured the least we could do was supply a little burlap fro his home.
In the end no turkey were harmed and we packed it in.  Back home I finished up a few outdoor chores while my buddy began his yearly vigil of watching the Masters.  All in all it was a great few days of outdoor activities even if I failed miserable as both a hunter and fly fisherman.  There's always next time an until then I'll tie some killer flies and practice my turkey calls.
Posted by Unknown at 9:26 AM

Phenomenal picture of that field mouse. Couldn't have gotten a better chance if you tried.

Great post...a little out of the ordinary but humorous. You really need to stop talking turkey Joel.

No fish and n o turkeys...sounds like some of my outings. Even so, always better then a day inside behind the desk. Way to get out and give em heck! Thanks for sharing.