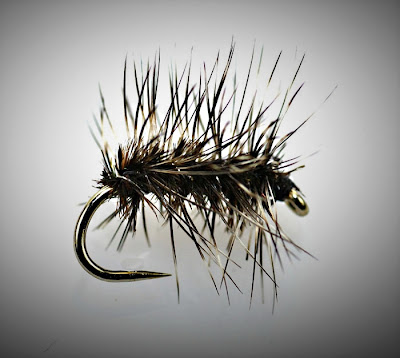 One of the most overlooked and productive flies in every fly anglers box.... or at least is should be.  The Griffith's Gnat is a constant that produces strikes time and again yet we pass by it often in favor of the bigger, more elaborate flies. 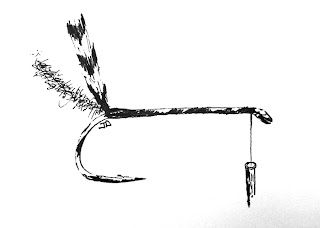 A small controversy surrounds this tiny little fly regarding the author who first tied the Gnat but one thing everyone can agree on is that there is only one man that made it famous.  George Griffith - that's right, one of the founders of Trout Unlimited - is not only widely credited with making this fly world renown but is also blessed with his name on it.
Thought to be created on the same banks of the Au Sable River that Trout Limited was later formed, the Griffith's Gnat as we know it today was first fished sometime in the mid 1950's.  It proved to be deadly for finicky trout that were feeding on small midges and emerging flies. 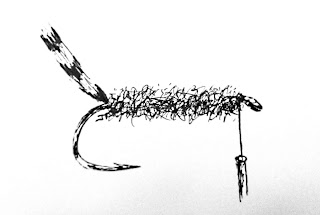 Its effectiveness is in its simplicity.  When you look at the small bugs buzzing around the streams and rivers you don't look at the anatomy of each of the varied species.  You see tiny nondescript bugs, tiny little things that bite you and annoy you insistently.   For a trout it is much the same only they see a meal, a constant source of food to feed on.  It doesn't need to be flashy or complicated, it only needs to be about the same size and shape of a small bug.
To tie this bug all you are going to need are a small - & I mean SMALL- hook, peacock herl, grizzly hackle, and thread.  A magnifying glass might also be handy not only for tying but for when you try and feed a tippet through that eye. 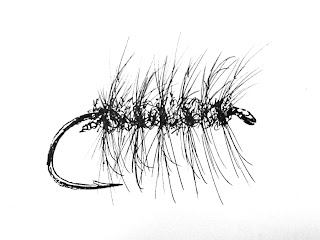 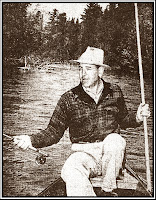 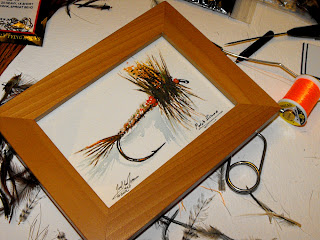 Now for the WINNER of the March Brown framed Painting.  Thanks to all of those that entered.  If you didn't win keep checking back in the future.  I plan on giving away a few more small fly paintings in the coming months.
As I do in all my contests and giveaways  I used a Random Number Generator to select the winner from the list of comments.   Steven Smith - comment number 8 - is our winner.  Congrats Steven, shoot me an email with your address and I'll send you out this fly tying table topper.  Enjoy.

One final note - I will heading up to Ashville on Saturday for the Western North Carolina Fly Fishing Expo.  It looks like its going to be a good show with a lot of good booths and demonstrations.  If you are heading up there shoot me a line.  I'd love to meet a few more bloggers in person.  Expect a full recap next week.
Until then, enjoy the weekend and a shout out to my fellow ND fans - GO IRISH!!
Posted by Unknown at 7:08 AM

Congrats on the win, Steve!

Thanks for having this contest, Joel! It was fun!

The Griffith's Gnat is one of my "go to" flies. Works on most everything.

Congrats Steve. You have a collector's piece of art!

Right on. That fly has saved the day for me many times on east TN tailwaters.

Thanks for the comments guys. Its a fly that's a go-to for many an angler. keep an eye out for future fly friday givaways.