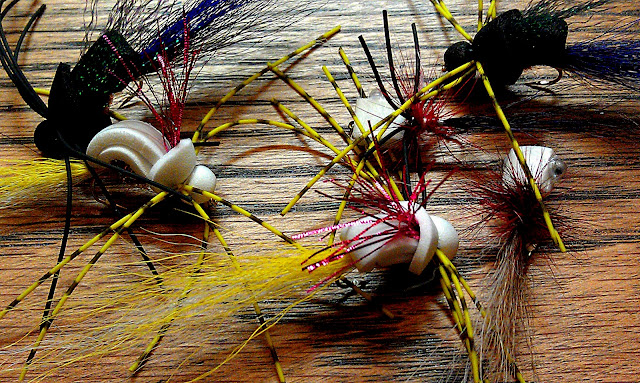 Despite the pressures of work and household duties I did manage to get a few hours at the vise the other evening and discovered something about myself.  I believe that I am the slowest fly tier there is.  In just less than two hours I only managed to tie up a pitiful six flies.  That's right, SIX.  Granted that there were a few other distractions present and I was not fully concentrating on the task at hand but still, It was a disgraceful showing. 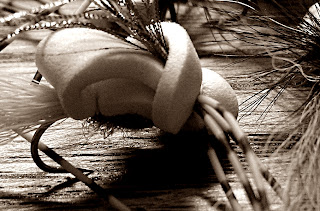 So what was so complicated that it took me so much time to make six flies?  Truth is the flies were not that complicated, I am just that slow.  First up was the bass and bream killer known as the Stealth Bomber.  I picked up a few materials to create this little effective bug at the Fly Fishing Show in NC this year and later got some instruction from Kevin.  I tied a few up in white to augment my box and then a few more in black.  I have to admit that I had to consult the instructions a few times during the first tie job - my memory for specifics of each fly is a bit hazy and I tend more often than not to just wing it. 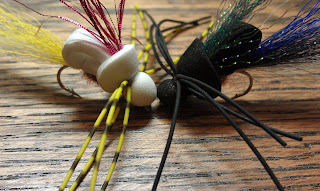 Of course even when I have the directions and material lists in front of me I also tend to substitute my own material at hand for the recommended materials.  In fact that is how I do most everything.  I guess that deep down I just think I'm smarter than the expert.  More often than not I come to find out that the expert is called an expert for a reason but when it comes to my own flies that I am going to fish, I don't really care.  They are mine so the Bombers you see are not the recommended way to tie them up but for me they still work just as well. 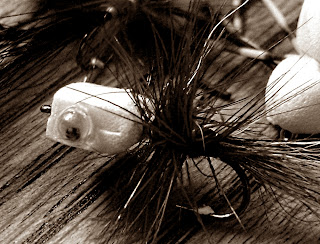 Next up was a foam popper, the inspiration of which came from an old bass book from the 70's.  Of coarse they used a different foam back then and the eyes where painted on but what they lacked I filled in.  This little guy is actually not so much a popper as it is a skimmer.  When played on the water, it dives just a few inches under the surface and then pops back into the film.  Tied in on a #10 or #12 hopper hook, this little guy is a true and tested bream killer.  I do however recommend (as you will read about later) that it is tied in something other than white.  For some reason the bass and Bream around me shy away from white unless it is streaking through the water. 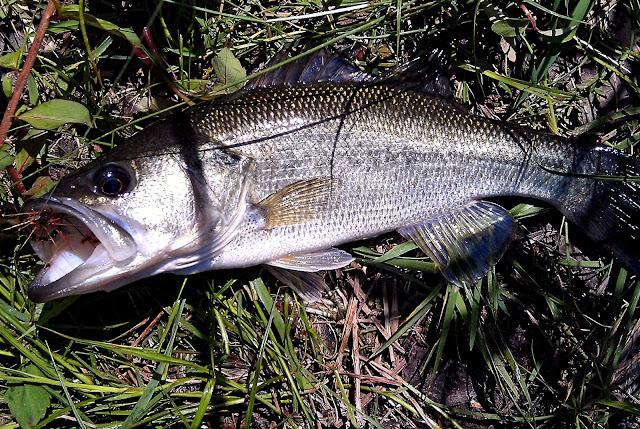 So how did these flies do on the water?  This morning I hit the pond to test them out and the black Stealth Bombers worked great and got a lot of attention.  I was excited to even get a few tailing fins as eager bass tracked it in on a faster - frog swimming - retrieves.  The white Bombers were snubbed and I found myself wondering why I even bother with them. 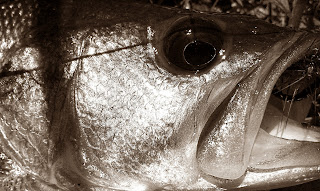 The small poppers got a little action with the bream and once again I found that white is a very unpopular color choice.  Green and especially black seem to work the best.
As the hours passed I fell back on the good old Woolly Buggers and rabbit strip streamers and hooked into a few bass.
Overall it was a morning well spent even if it took me so long to tie those flies up.  One things for sure, I would never make it as an expert tier.  How those guys whip out dozens upon dozens of flies in as many minutes as it takes me to set up my vise I'll never know.
Posted by Unknown at 5:10 PM

Hey Joel. I guess it is the length of experience that makes those guys that tie a fly a minute the way they are. I'm not a speedy tyer either and I think that most of my slow speed is because I stop and think about what I'm doing more than just doing it.

Kevin - thanks for tuning me into these great little flies. Hungry bass love them.
Shoreman - I'm with you. I tend to spend much of my time pondering what item I can add to the fly to make it irresistible to fish.

I love the post, and the photography! The Bombers look great! I am going to chalk that one up as a must-try when I get my fly tying gear up. I am following your blog now. Love it!

AG - Thanks for the visit and kind words. The Bomber is a great fly and I recently added a post that gives instructions on how to tie it and fish it. Good luck.

A very nice post. I love fishing poppers for warm water fish. The take is just so exciting. Check us out at www.gotflyfishing.blogspot.com