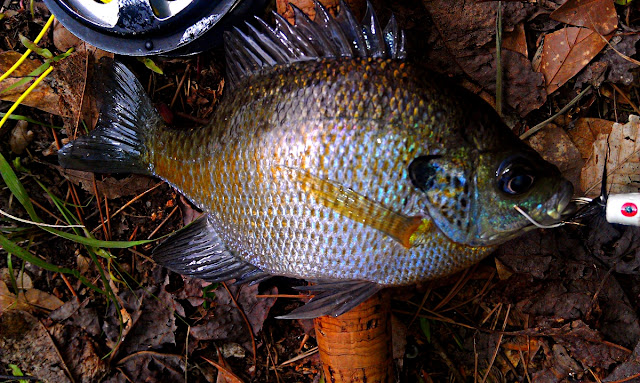 I had a few hours between dropping the kidos off at school and having to leave for work so I tossed my 4 W in the back of the car and headed out to do a little panfish angling on the fly.  Small poppers, spiders, and inchworms were the weapons of choice and as the sun began to heat up the pond, the fish responded in kind.

I think panfishing is so fun because they always take stuff off the top.  rarely if ever are you going to test your line strength on these fish (though I have landed a few that could have easily filled a standard sized skillet) but you are never going to be disappointed with their takes of stuff off the top. 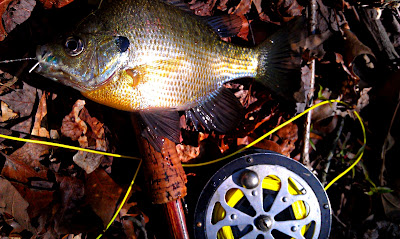 I once read an old article on 'fly fishing in the south' from a magazine dated around 1910 (I enjoy reading how the old timers did it back then mainly because they knew how to tell a good fish story) and although it primarily focused on the 'Black Bass' it did have a little to say on the good times of tossing flies to all-to-eager sunfish, bluegills, and bream.  It went on to say that if an angler was so inclined, he could easily line a stringer with 30-40 of these fish in less than an hour and feed the family well that night.
Back then they would have scoffed at the idea of catch and release primarily because food was never something you threw away.  In fact I imagine if you would have asked about their catch and release views they would have looked at you for a long minute and say something to the effect that 'occationaly one got off the hook but with a good set you can easily bring them in.' 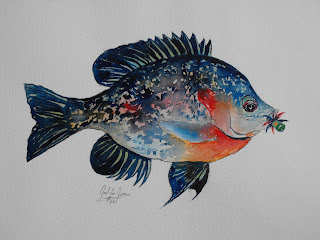 Part of that is true today; a good hook-set will easily lead to more fish but most fly anglers today are strong advocates of catch and release instead of the classic 'stringer of fish.'  The reason I suspect is that cleaning these fish is tedious at best, food is easily retrieved at a local grocery store instead of the pond, and most of us believe in the sustainability of our local waters.  Of course all that is a bit high minded to some and it doesn't stop some corn fishers from raping my favorite pond of big bass and bream by the bucket full, but I digress.
Don't get me wrong, I would never pull a bugger out of a big bass's mouth in favor of hooking a bluegill and I would always choose a trout water over a bream pond if the two were side by side but for a few hours to kill and no time to head to the mountains, fishing for these little (and sometimes skillet sized) panfish is non stop action at its finest.  All fly fisherman can agree that any fish that consistently takes dry flies off the top is a worthy and fun species to catch.
Posted by Unknown at 5:21 PM

I am actually beginning to appreciate the fun of these fish once again. I have been crushing them with a 4wt and think that I may pick up an inexpensive 2wt just for giggles and those quick trips to the pond

I've hook quite a few of those panfish in the south Chicago suburbs and like most Midwest wildlife, they are all big. Make sure you get a 2w with a strong backbone. My 2w is just to willowy when it gomes to casting longer distances and strong hooksets. The occasional bass makes a good run of it if I use my 2.

Funny and strange fish. In any case for me. In Poland, there are none. For me it is a total exotic. Despite this, congratulations to catch!
Tom O

I love panfish. They are that first fish for everyone and continuing to catch them just takes me back to the days of old of my grandfather teaching me how to fish with a cane pole of sunnies. Times back then were simplers.. Now I chase them with my 2wt and sit at the bench at night figuring out what I wanna tie for them next.

Great blog! Love the artwork too!