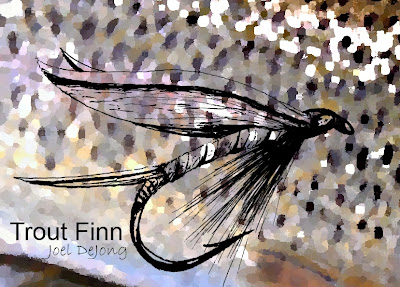 After a work imposed hiatus from wetting a fly, I shrugged off the past couple of weeks and headed up to the foothills for a morning of chasing natives on small streams.  My destination was the beautiful mountain cut of Jones Gap State Park 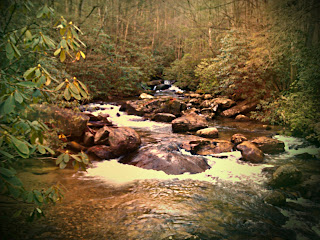 My relation with the small out of the way park began shortly after I arrived in South Carolina.  I began to hike its numerous trails, seek out its hidden waterfall, and marvel at the untouched beauty of the place.  It was also the reason I began to fly fish.  The lure of the high gradient stream the flowed through the parks heart was to much to resist.  One day, while hiking up the main trail that paralleled the stream I took a moment to admire a lone fly angler testing an isolated pocket of water tailing from a plunge pool.  Soon I found myself back at home surfing eBay for an affordable fly fishing setup. 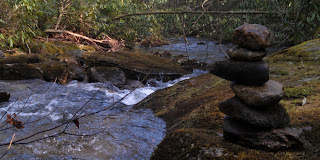 Since that time I have continued to come back to this park time and time again.  My first fish on a fly was caught here on a $12 -fifty year old hunk of junk 5w rod and busted reel with equally old fly line.  The fly that did the job was a cheep mass market pan-fish fly that fell apart soon after that first trip. The rod and reel didn't last much longer but it didn't matter.  From that moment on, I was literally hooked on fly fishing. 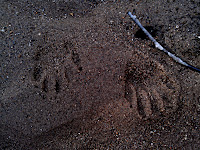 I have never caught vast numbers from this small stream.  In fact the best day has only netted five to six trout but this stretch of river that has scored its way through the hills over the years produces trout that are as pristine as any New England or western stream.  The beauty and wildlife in this park along with the quest for that elusive natural brookie I have only seen from the end of my line a hand full of times keeps me coming back. 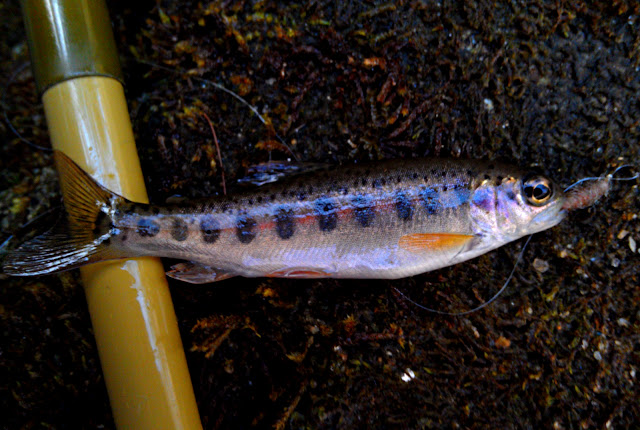 For my return to these sacred waters that started my fly fishing life, I was once again left with a nearly empty photo creel of fish pics.  The small trout above was all that decided to reward my four hour pursuit up the deep canyons and rock scrambling.  I hooked into this young one with a new Tenkara rod that is perfect for the tight quarters and small pools found in the high end of the park.  I would be lying if I said I would rather hook into fish like this over the 12-16 beasts of other waters but truth be told, there are very few other places that I would rather catch and release fish.
All anglers have that spacial place they go back to and have a connection with.  They know, or are in denial, that their spot in NOT a secret.  There are others that fish there and even others that might share the same hold on that water but when you are out there, all alone, nothing but them the water, the fish, and the fly - That water is yours.  Jones Gap is mine.  Its not a secret, its not even entirely good fishing, but its mine and ever time I go there I leave a happier angler for making the trek. 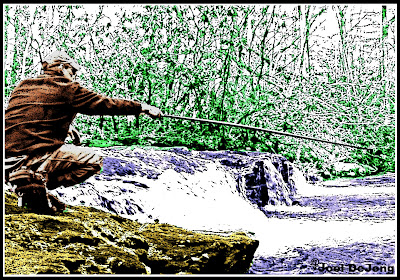 (The Trout Finn fly (top) and the bottom photo of me on the stream, Tenkara rod in hand, have obviously been altered by a board angler.  I fished Jones Gap a few days ago and was planning a post of my trip when I read that Outdoor Blogger Network was asking for a posts on your favorite places.  Talk about timing.  Check out other anglers favorite places at Field And Stream.)
Posted by Unknown at 5:12 PM

A classic wet fly, a free flowing stream, and a beautiful trout.

Lovely. Couldn't agree more about those special places. Thanks. (Can't wait to see that jewel of a trout in watercolors!)

A great story, Joel. Thanks for sharing.

Joel you're the first person in quite a while has actually made me jealous of not getting out. Of course it's 30 or degrees cooler here. Cheers...

With all the comments from so many fellow anglers I can tell that you all have water that feels special to you. Thanks for the comments, each and every one of you!

I know what you mean about these special places, that calls us into its fold. I think the draw of nature,the cool running water, and what lerks around the bend of these streams draws us, as fishermen.

Gone fishing and goneflyfishing - thanks for the kind words, I'm glad this post resonanted with so many anglers

What a fantastic article!