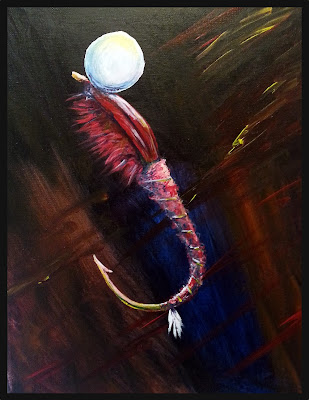 The Red Midge is a massive food source for the fish we love to go after.  Easily identifiable by their bright blood red color these wonderful little larva may grow up into a pest that leave itchy welts on determined fishermen but in the worm stage these midges are simply awesome to fish with.
While researching this painting I was reminded just how innovative fly fishermen are with the shear scope of patterns that have been developed to imitate these little bugs.  I have no doubt that all the patterns posted on the web and in books can fool a fish into taking this midge.  There are roughly over 1000 different types of Chironomidea throughout the world and since I don't think fish really care which species they eat I expect that they simply eat the ones they see floating by.  But if that is the case, why don't I hook into fish every time I fish them?
I believe it has to do with the recognition of species to a specific stream.  In short, what works on a Maine stream might not work on a Utah river even if both water systems are choked with the blood worms.  That being said I am also convinced that there are a few patterns out there that work no mater what.  So I ask you - what patterns are the most effective for you?  And a follow up - do you commonly use them?

Now about the painting.  I again went to the canvas on this painting with the objective of gaining experience in the medium.  Determined to paint a Bloodworm I was faced with choosing the right worm to paint.  Painting just a simple red line on the the canvas just didn't seem exciting enough so I choose to go with the suspended worm.
Imitating a struggling worm as it attempts to break the surface of the water, the suspended worm is a popular choice among anglers.  Not only do fish see a struggling worm as a prime feeding opportunity, the white foam ball near the head of the fly allows a keen angler the ability to track the midge in smooth water. 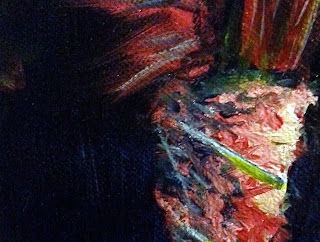 With the subject selected I then decided to make it really pop off the canvas with a background that would showcase the white foam ball of this iconic fly.  You might not be able to truly see it in the photographs but the background is a mix of dark reds, blues, and blacks.
Unfortunately I am discovering that photographing the final work is almost more difficult that doing the painting.  The soft gloss effect of the paints coupled with the texture of the canvas and paints make photographing the true colors of the work near impossible.


The Suspended Bloodworm
Acrylic On Canvas
For Sale 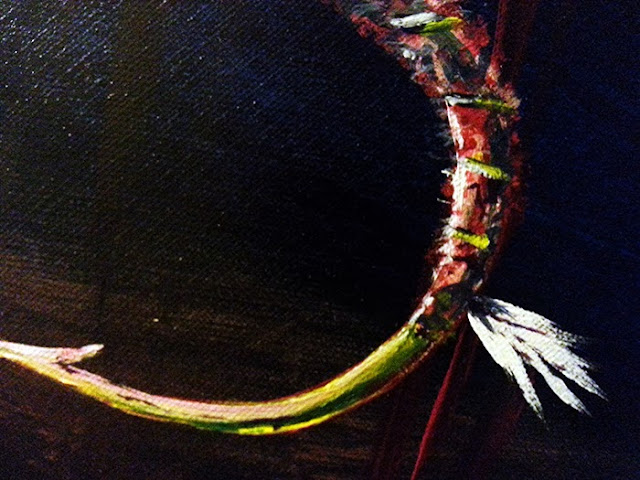 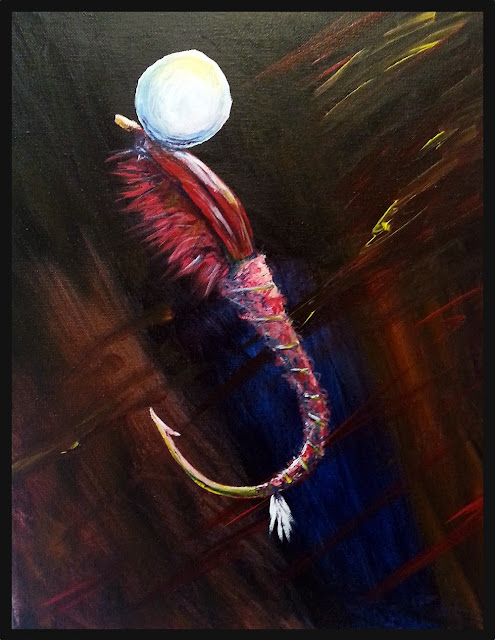 Terrific work! Trout love blood worms, (a.k.a. San Juan Worm) just about everywhere I have fished. This is a staple in most fly boxes out west.

I also LOVE that mayfly painting you did! Probably one of my favorites

Glad you guys liked it. Love them or hate them, the blodworm hooks fish.
The little worm gets a bad rap from a lot of anglers so I hoped that this fly was a little more appealing to the classic nymph crowd. Of course the dry fly only guys will still turn up their nose but you cant please everyone.