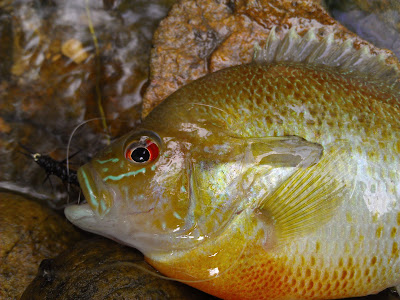 I decided the other day to brave the sweltering 95 degree heat and go chase a few new blue lines up in the mountains of SC.  I really shouldn't have gone but the draw of fishing was just to much to handle and I left early to explore this new water. 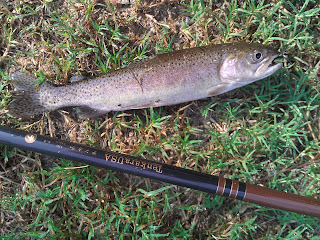 The first fish was a nice little rainbow caught deep on a Tenkara rod with a typical Tenkara fly.  It was down deep in a big 80 deg bend on this small stream way back in the mountains.  At this point it was a pleasant 90 degrees and I figured that this little guy was the only trout I was to catch that day.  After all, It was only going to get warmer and with the way the temps have been lately, I suspected that the trout were going to shut down as the temps rose. 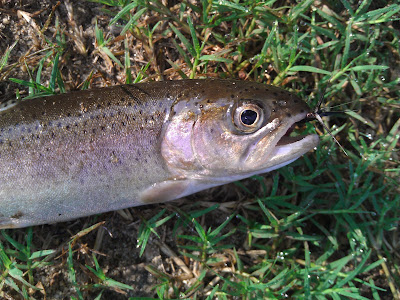 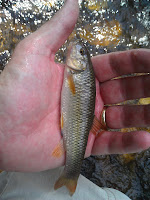 My suspicions about the trout were soon confirmed when I caught this shiner.  I have hooked a few of these guys while fishing my favorite trout streams, and while I don't know their true names I figure they are the reason why the trout go after my Black Nose Dace streamers with so much enthusiasm.  This guy was the biggest one of its kind I have hooked.
Next on the list, I hooked into a pool of sunfish with the brightest yellows and reddest eyes I have seen.  There is always something about mountain streams and their effect on the colors of the fish that inhabit them. 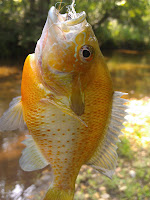 I hooked a lot of these guys on a big black stone or (as seen from picture on the left) a haggard Black Nose.  Bluegills and sunfish are such a fun fish to catch and doing it on a stream where both brown and rainbow trout are known to live is not really a letdown when you see how brilliant their colors are.

As noon approached and the temps reached into the mid 90's I started to make my way back to the car.  I figured that the fish were done and the snaked would soon control the waters edge and I do not like battling with snakes for a stream side spot.  As I waded the stream back I saw a few rises in front of me.  suspecting a sunfish was the culprit I tossed a fly in his direction and got a hit.  Imagine my surprise when in the next jump from the hooked fish, I noticed that a nice Brown trout had made an appearance.  In sun drenched 95 deg temps and in less than a foot of rushing water, a brown trout was actively feeding on the surface.  Amazing!  No pic because as I reached for the fish, he leaped into the air, gave a wave of the fin and broke free.  I hooked two more in the next five minutes, both of which where released in relativity the same manner.  I guess it goes to show that you never know what to expect while chasing those blue lines.
A few minutes later a large snake crossed the stream a few feet from me and gave me the eye.  I took his suggestion and headed for the car.  I cant wait to see what the stream gives me when the temps begin to cool down.

Also For those of you that are wanting a Tenkara Shirt, I have decided to offer the shirt in all THREE colors. They are only $17 plus Shipping (5.40) and can be purchased with Paypal or any major credit card HERE.  The shirts will be printed on the tenth and shipped out as soon as possible.

Really nice post. I've never seen a sunfish before - it looks like it'd be more at home on a reef!