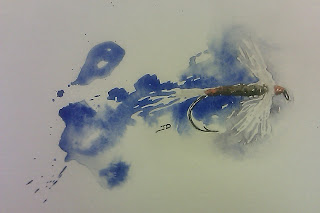 A wet fly to imitate a variety of aquatic inhabitants. Also I took a little afternoon trip to the northern Greenville Co trout waters on tuesday. It had been the first chance I've had for a while to get away but the trout gods did not smile on me - I believe they are angry at me lack of devotion. A friend, his kid, and I explored new waters and found some good holes. unfortunatly the only member of our party to hook fish was the young one - three nice rainbows and a small brown. It was his first time fishing for trout and it was enjoyable to see him hook up despite the trash talking his father and I had to endure the whole ride home.

This is a picture of our last stop. It was under a bridge I've driven over many times but never stopped to explore. When we roled up there was one other fisherman there that said a few minutes ago, on the far bank, a guy pulled up and popped off a few shots his way. I was wondering one, if it was true and two, if it was true WHY was he still fishing - he said he had caught 3 or 4 nice rainbows. A few minutes after that a few squad cars roled up and cased the area. It didn't get in the way of fishing though and it was in this spot our young friend caught three nice fish. So a word of warning when fishing hidden holes in the south - be aware that some holes are guarded by armed locals willing to use force.
Posted by Unknown at 8:09 AM

Duuuude. That's hardcore. I don't want to be shot at while fishing....what the hell?

Back to the pic - awesome. That is a beautiful piece!